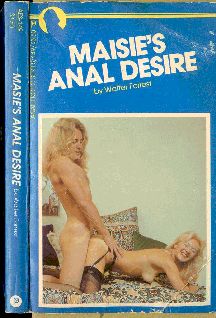 Maisie Cummings lay on her side in the front seat of the car. She knew very well the man could see underneath her skirt all the way to where the white lace of her panties interrupted the line of her long, tanned leg. Even in the darkness of the night the small lights on the dash were more than adequate to show plenty of skin. She was barelegged and shoeless. She thought she felt a couple of pubic hairs sticking out of the leg band of her panties and wondered if he could see them. She had seen herself like that at home in the mirror while lying on her bed and thought it looked pretty sexy to be all sprawled out with one or two curls visible from inside the silky undergarment.

He was standing beside the car with the door open. She saw him avert his eyes quickly when he saw that she was watching him look up her dress. She decided he must be pretty dense.

"Go ahead and look, silly," she giggled. "You think I don't know what you want to see? You've had your eyes on my legs ever since I let you pick me up. I know darned well you want to shoot a little beaver."

He wasn't used to young girls talking about such things. He met her eyes with a start.

"Wait a minute, sweetheart," he said, his eyes narrowing. "You a pro or something? I thought you were just hot to trot and needed some loving. If you got money on your mind…"

Maisie cut him short. "I'm no whore, mister. Just because I talk about shooting beaver, you think I'm a whore? I just liked your looks, that's all. What are you, about forty? I'm nineteen. So what? Money has nothing to do with it. But if you're such an old fogy you get shook when you hear a chick rap about sex, then just forget it."

She started to raise up in the seat but he stopped her. He was just beginning to understand what he had on his hands. He smiled at her with greedy eyes.

"No. Hold it. We're going to get along fine now. I thought you were trying to pull one on me. Most girls are scared to talk about it. You want a big prick up your snatch, huh? Is that it? You want me to fill your emit full of my cock and give a nice healthy fucking, don't you?" he exclaimed.

His face was red and Maisie could see he was working up steam just from talking about it to her.