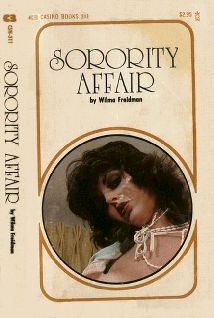 Many people still are burdened with the false impression that adults and children in grandfather's day were somehow devoid of all sexual desire and feeling. According to this unrealistic view of society, they were "supposed" to be. Sex was not to be discussed at all costs, certainly never mentioned in polite society. A man was expected to "sow his wild oats," a licentious state of affairs that was accepted and tolerated but not condoned. However… "boys will be boys," but girls had to remain sexless at all costs-even prostitutes in public houses were not permitted in taverns and saloons-virgin-pure and lily-white of virtue and character! Sex was "God-given and sacred," but still dirty and exceedingly nasty. A wife had to "give" herself to her filthy and obscene husband, because it was the order of things; husbands were like that-dirty and filthy, thinking only of the "fuck." And even the "antifuck" establishment had to admit grudgingly that sex was necessary for the propagation of the precious race. But only a lustful wife would enjoy such a filthy act!

During those days it was quite natural that many women became as frigid as icebergs over such warped teachings, retained from childhood. But not all. Some of those grandmothers were real swingers. Some were even pedophiles!

An elderly retired man in his eighties, told this writer: "I don't like admitting it, but I bad an old maid aunt who must have been a pedophile. I was born and raised in the Midwest, a little old farming community. One winter-I believe it was around 1890 or someplace in there-I was sent to visit this old aunt, about a hundred miles from my home. My parents didn't accompany me, and the only reason they sent me was to escape the flu epidemic that was going around.

"My aunt-she was about thirty-had a small house on the edge of town, and she was a dressmaker and well thought of in the community. I was about eight years old at the time. I slept with her because she said I would be warmer by being in her bed. Naturally at my age, I suspected not one damned thing. I had no reason to; she was my aunt, wasn't she?

"About the third night of my visit, I was in bed with the old dame and was half asleep, when I felt her hand working through the slit of my pajamas. I lay there, startled and frightened to death-completely immobile. I do confess that when her searching fingers found my cock and began caressing it, I enjoyed the sensation very much. Understand, I knew nothing of the sexual process, but you don't have to sit on a red-hot stove to feel the heat. By the same token, children don't have to have the sexual knowledge of a psychiatrist to enjoy the sensations produced by their budding sexual processes. I lay there, pretending that I was asleep, and let my aunt play with my prick.

"The next night-and I was anxious to go to bed with her by then-she repeated her fondling performance, only after a time she discovered that I was not asleep. She caught me with my eyes open. She stared at me for a moment, startled to learn that I was aware of her actions. Quickly she drew back her hand from my prick, uncertain of what she should do. I decided for her. I took her hand and placed it back on my hard little prick. This surprised her, and she said, "You won't tell your mother, will you? You must not, you know." I said I would not and she went back to playing with my cock.

"After a bit she pulled back the covers, undid my pajamas and pulled them from me, so that I was naked from the waist down. Then she began to suck my cock. Naturally I couldn't have a come at that age, even though the mental stimulation was there. I guess you might say I had a dry run.

"After the old bitch sucked me, she really got dirty. I suppose that since she felt I enjoyed it and wouldn't tell my mother, she could go whole bag, so to speak, and do anything she wanted with me.

"She removed my pajama top and began kissing me all over, even sucking my nipples. She asked me to perform cunnilingus-eat her pussy-on her. I didn't know what she meant or what the act consisted of, but she said she'd show me. She lay on her back and told me to get down at the foot of the bed and put my head between her legs. I did so, having my face only inches from her hairy cunt-and I do mean hairy! She was covered from belly button to asshole with a thick thatch of dark blonde hair. She took both hands and pulled my face to that wet slit, telling me to, in her words, ‘put your tongue in through the hair and lick my hole all over. You'll like it… really enjoy doing it.'