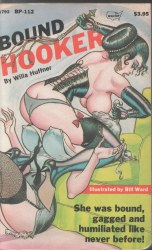 Leather straps held me tightly bound to the wooden cross, which was shaped somewhat like an X. The upright pieces which held my arms were spread out at a forty-five degree angle. The bottom part of the cross which held my legs was spread out so much that my legs were almost in a complete split.

There were straps around my wrists, above my elbows, around my ankles, and just above my knees. Another one was pulled tightly around my waist. The positions was agonizing enough as it was, but there was an extra piece of wood on the cross just under my ass which forced me to keep my hips pushed well forward like I was inviting a cock to have a go at my cunt. To make matters still worse, the extensions of the X were curved back slightly, pulling my arms and legs back. My torso was completely exposed and vulnerable.

Three men stood in front of me. They were naked except for masks and black leather boots. Each one held a whip which had a foot long handle and two ugly looking thongs that were also a foot long. They looked strong enough to do me damage but I was more interested in their already hard cocks.

They were average in size and certainly nothing larger than I had taken many times before. They were so stiff that they looked like they have not been satisfied in weeks. I had no doubt that one or all of my holes would be invaded before the night was over. That I didn't mind but the whips were fearful.

To make matters still worse, there were three men and three women sitting as an audience. I never minded showing myself off to men at any time in private, or even to women if they were also naked, but when they were fully dressed, I felt totally humiliated. I was sorry that I was not gagged and blindfolded so I could hide my feelings from them.

The three men stood about me to give them the best vantage point to use their whips. From the positions they took up, I knew my tits and cunt would be their targets.

I didn't mind the whip on my pussy because more often than not, I had my strongest orgasms from it, but I dreaded having my tits whipped, particularly in this position which allowed no defense and kept the skin stretched tightly. Each blow was multiplied a thousand times and caused me to scream until I fainted.

Their arms raised in unison and struck. One on each tit and one between my legs. I yelled as the searing pain ran through me.

My cunt felt warm but my tits felt like they were on fire. Tears ran down my cheeks, not so much from the pain but from the helplessness that I felt. There was no way to make them stop.

They waited a minute or so before striking again. I looked at the women who were dressed in evening gowns. I knew they could read my innermost feelings. If they would only touch themselves or touch the men sitting next to them, it would have been easier for me, but they sat very still with their hands demurely folded on their laps.