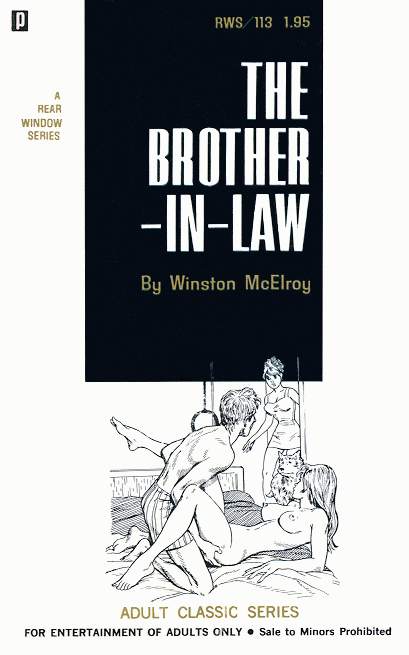 The offices here were disgustingly similar to those of every other employment agency Ginny Dennison had visited since Monday when she began in earnest to find a job. And not a particular job this time; she'd learned her bitter lesson about job-hunting long ago. This time she had promised herself to take anything offered to her, anything from file clerk to dishwasher.

She read down line after line of qualifying questions, and reluctantly checked "none" for each of the areas of previous experience desired. And why not – there was no reason to think that this agency would be any different from the ten or twelve – she'd lost count – that had already turned her down. Oh, not in so many words, of course; agencies have a way of saying no without actually saying it. But that "we'll call you or drop you a card if anything comes up" is more than adequate.

This agency had advertised for cocktail waitresses, and though she had never had any experiences there either, it certainly did not seem too difficult, and Mr. Bondman had told her on the telephone when she answered the ad that sometimes they considered girls without experience as trainees. At less salary, of course, but at this point, salary was the least of Ginny's worries.

She knew she had to find work somewhere, or start climbing the walls. Fred had been gone now for over seven months, and for a bride of only three weeks, that sort of absence was hard to swallow. But Uncle Sam has a habit of putting his soldiers where he wants them most, and for a brand-new draftee, there wasn't much chance of getting any choice. Fred was in Germany; at least she had that much to be thankful for. He could just as easily have been sent to some jungle outpost in Vietnam, and that would have unquestionably been more than she could have taken at once.

It wasn't really a matter of economics, just more a problem of trying to stay busy. Without a job, and nothing to do all day, the weeks seemed like months, and sometimes it seemed that Fred would never be coming back at all.

"Have you finished your application?" A short, stubby balding man stepped from the inner office, closing the door behind him. She guessed he was the one she'd talked with on the phone. In fact, he seemed to be the only person around.

"Yes… I've finished," replied Ginny, "but I'm afraid it won't be much help… I just don't have the right experience to get a job, it seems…"

He smiled benevolently, "Well, why don't you let me be the judge of that… You might be qualified for something you never thought of." He motioned toward the open door to the inner office. "Why don't you step inside, honey, and we'll talk it over." Something was odd about the faintest outline of a smirk on his face, but Ginny was in no mood to be choosy.

The inner office lacked the refinements someone had added to the reception area; at least the outer office was paneled and well-supplied with fairly comfortable vinyl and steel chairs. The private office showed evidence of not being painted since World War II; the pale green paint was peeling in layers, like dead flesh from a bad sunburn, and there were broken sections of it here and there on the faded, sun-bleached carpet. Marty Bondman's desk was old and battered, but without a trace of soul; and a large, upholstered wooden swivel chair stood behind it, where Bondman lowered his bulky, fleshy frame. "Now, let's take a look at your qualifications," he said, glancing over the penned notes on his brief application form.

"I called you earlier," began Ginny. "You said something about a trainee cocktail waitress position I might be qualified for… I don't have any experience… I guess you can see that." He glanced up from the paper with that same vague smirk and looked over her, as if making some mental appraisal.