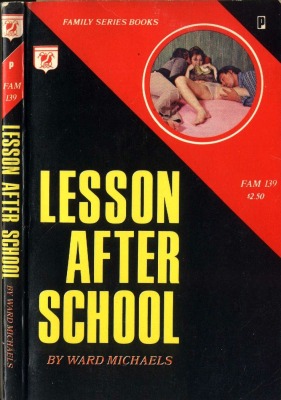 Betty Wingate paced up and down the rows. Her students were absolutely quiet, or as quiet as high school seniors ever can be, especially when it is spring, and graduation is only a few weeks away. They were writing themes, and Betty walked around, peering over their shoulders, trying to see how well they were doing.

She congratulated herself. At twenty-two, she had nearly made it through her first year of teaching English. Everyone told her she would never get a job, that English teachers were a dime a dozen, but she had shown them. Of course, she had to admit that her blonde good looks and her deeply violet blue eyes helped, but what did that matter? If Mr. Saunders, the old principal, was turned on by fresh, young females whose skirts fell above their knees, that was not her fault. She had taken advantage of the situation, the way anyone would. Betty smiled to herself as she remembered that first interview. She had held her eyes as wide open as she could, looking sweet, innocent, and available. When she crossed her legs, and Mr. Saunders' bifocal covered eyes fell to her bare knees, she was quite sure she had the job. She was right.

"Hey, Teach, come here a second." It was Dale Paulson. Far from Betty's favorite student, his attitude was insolent, and his appearance matched it. Tall and lanky, he looked like a fugitive from the nineteen fifties, with slicked back hair, black and greasy looking, thick leather boots with heavy heels, a form fitting tee shirt, and jeans so tight it seemed a wonder that his feet did not go to sleep. The prominent bulge in the front of the skin-hugging pants made Betty think he padded his underwear. Of course it could be that Dale simply had a perpetual hardon, but she preferred not to think about that.

"Dale, I've asked you a thousand times not to call me "Teach." My name is Miss Wingate. How can I help you?" She leaned over the boy to look at his paper. The acrid smell of sweat floated up to her, and she practically reeled with it. Didn't this boy ever bathe? There was something else too, dried urine or musk or something that reminded Betty a lot of a male crotch. She held her breath, trying to forget about the memories that smell brought to mind.

She focused on the paper. It was blank. "Why, Dale, you haven't written a thing. What's the matter?"

"I can't think of nothin' to wite about."

"Anything. You can't think of anything to write about."

"Right. Nothin' comes to mind. What do I do?" He reached between his muscular thighs and scratched at the huge bulge in his crotch. Betty's eyes followed despite herself, and she felt a rise of desire in her belly. That was wrong, and she closed her eyes tight and stood there for a moment gripping the back of the chair.

"Somethin' wrong?" Dale asked. He had stopped scratching, but his hand remained in his crotch, squeezing at the bulge lazily.

"Nothing. Nothing at all. Look, I asked everyone to write about how they were going to spend their summer vacations. Surely you can put down something about that. What do you plan to do in the months ahead?"