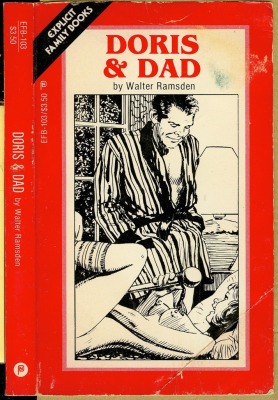 Doris knew when her daddy, Orville Hagerman, walked into the house from the garage she was in for it-again. He hadn't said anything, just stared at her, his pale eyes expressionless and unblinking.

A strange nervousness, not fear exactly, shivered through her as she stood over the kitchen range, listening to the tall, sinewy man complaining in the shower. What could he find as an excuse to spank her today? She had done the washing and had supper on.

"I'm gonna tan your ass-bare again," she heard her father bellow after he had turned off the shower.

"Phil never gets it," Doris said with a trace of bitterness, referring to her brother who was fifteen, just two years older than she was. "He gets away with everything."

She tried to ignore her father as he seemed to skulk in the entryway between the kitchen and the dining room. Warily, she glanced toward him from the comer of her eye. Her heart bounded uncontrollably as she saw him standing there in nothing but his boxer shorts, tufts of coarse, red hair visible through the slit.

"I'm gonna blister your ass," he said in a tone as if he had been defied.

"I haven't done anything," Doris said defensively. "I got supper cooking." From the bulge in his shorts she knew, intuitively, he was all swollen up.

"Come on in the living room," her daddy said, pointing imperiously with a long, hairy arm.

"Turn off the burners and get yourself in there," he said, stomping a bare foot, shivering the floor of the old house.