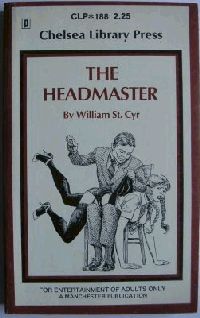 "Erica Schmidt reporting for punishment, Mr. Hopkins!" The words came out slowly and with obvious effort, and it was readily apparent that the attractive teenager who uttered them was having great difficulty retaining her composure.

Seated behind his oversize walnut desk, the Headmaster of Marshall Girl's Academy did not at first look up from the report he was reading.

The office of the chief administrative executive of the exclusive girl's school located in the north of England was quite austere and not calculated to ease the anxiety of the miscreants who were regularly required to report there for discipline. At the moment, the only relief came from a partially opened window, through which drifted a warm breeze that served as a reminder that the spring of 1939 had been one of the most pleasant in years.

"Mr. Hopkins…" The girl's words trailed off in despair. The comely eighteen-year-old knew that the wait was deliberate, and designed to increase her apprehension as well as humiliate her. Her hands clutched nervously behind her back, she could barely stand still. Her dark blue eyes constantly darted around the room, anxiously searching for that whippy, pencil-thin cane that she dreaded so much. For some reason which she did not comprehend, the hateful instrument was nowhere in sight.

Normally, it was prominently on display.

At last, Mr. Hopkins set aside the report and looked up at the obviously troubled teenager who stood in front of him. A hasty glance satisfied him that she had complied with the academy rule that required all girls to report for punishment attired in their full school uniform. This consisted of white blouse, plaid tie, pleated black gym slip held in at the waist by a red sash tied at the wearer's left, black stockings, and three-inch spike heel black patent leather pumps with straps from behind the ankle tied in a bow in front.

The schoolgirl uniform did not conceal the fact that Erica possessed a highly promising figure, buxom and shapely. Her long blonde hair, tied in two pigtails, hung nearly to her waist in back, and the juvenile style required by school rules looked quite incongruous when compared with the obvious fullness of her plump breasts, which proudly pressed outward against the jumper of her gym slip. Enhanced by her black stockings and elegant footwear, her shapely legs and highly arched feet looked absolutely stunning. Her gym slip was hemmed to end a full six inches above her knees, because the archaic and absurd school rules were designed to make the girls feel juvenile and this was supposedly accomplished by requiring them to wear styles associated with young girls.

But as Erica and numerous other girls had discovered, the absurdly short gym slips could create effects quite unintended by their sponsors. For, as the girls had learned, some to their embarrassment and others to their intense delight, the combination of short skirts, black stocking tops and milk white thighs was completely mesmerizing to the masculine eye. By flashing her white thighs, contrasting vividly with her black stocking tops and garter belt, a girl could usually get exactly what she wanted from the opposite sex.

"So we meet again, Erica!" Mr. Hopkins finally spoke. The statement had its obvious implications, and their eyes met with understanding.