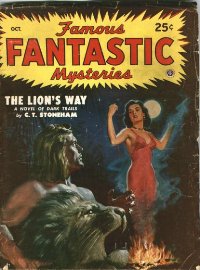 What a road! What filthy, dismal, blinding rain! And, by the ghost of old Horace Greeley, what an idiotic, impossible assignment!

John Shellinger cursed the steamy windshield from which a monotonous wiper flipped raindrops. He stared through the dripping, half-clear triangle of glass and tried to guess which was broken country road and which was the overgrown brown vegetation of autumn. He might have passed the slowly moving line of murderous men stretching to right and left across country and road; he might have angled off into a side-road and be heading off into completely forsaken land. But he didn’t think he had.

“Get the human angle on this vampire hunt,” Randall had ordered. “All the other news services will be giving it the hill-billy twist, medieval superstitution messing up the atomic world. What dumb jerks these dumb jerks are! You stay off that line. Find yourself a weepy individual slant on bloodsucking and sob me about three thousand words. And keep your expense account down—you just can’t work a big swindle sheet out of that kind of agricultural slum.”

So I saddles my convertible, Shellinger thought morosely, and I tools off to the pappy-mammy country where nobody speaks to strangers nohow “specially now, ’cause the vampire done got to three young ’uns already.” And nobody will tell me the names of those three kids or whether any of them are still alive; and Randall’s wires keep asking when I’ll start sending usable copy; and I still can’t find one loquacious Louise in the whole country. Wouldn’t even have known of this cross-country hunt if I hadn’t begun to wonder where all the men in town had disappeared to on such an unappetizing, rainy evening.

The road was bad in second, but it was impossible in almost any other gear. The ruts weren’t doing the springs any good, either. Shellinger rubbed moisture off the glass with his handkerchief and wished he had another pair of headlights. He could hardly see.

That dark patch ahead, for instance. Might be one of the vampire posse. Might be some beast driven out of cover by the brush-beating. Might even be a little girl.

He ground into his brake. It was a girl. A little girl with dark hair and blue jeans. He twirled the crank and stuck his head out into the falling rain.

The child stooped slightly against the somber background of night and decaying, damp countryside. Her eyes scanned the car, came back to his face and considered it. The kid had probably not known that this chromium-plated kind of post-war auto existed. She’d certainly never dreamed of riding in one. It would give her a chance to crow over the other kids in the ’tater patch.

Evidently deciding that he wasn’t the kind of stranger her mother had warned her about and that it would be less uncomfortable in the car than walking in the rain and mud, she nodded. Very slowly, she came around the front and climbed in at his right.

“Thanks, mister,” she said.

Shellinger started again and took a quick, sidewise glance at the girl. Her blue jeans were raggedy and wet. She must be terribly cold and uncomfortable, but she wasn’t going to let him know. She would bear up under it with the stoicism of the hill people.

But she was frightened. She sat hunched up, her hands folded neatly in her lap, at the far side of the seat right up against the door. What was the kid afraid of? Of course, the vampire!

“How far up do you go?” he asked her gently.

“’Bout a mile and a half. But that way.” She pointed over her shoulder with a pudgy thumb. She was plump, much more flesh on her than most of these scrawny, share-cropper kids. She’d be beautiful, too, some day, if some illiterate lummox didn’t cart her off to matrimony and hard work in a drafty cabin.

Regretfully, he maneuvered around on the road, got the car turned and started back. He’d miss the hunters, but you couldn’t drag an impressionable child into that sort of grim nonsense. He might as well take her home first. Besides, he wouldn’t get anything out of those uncommunicative farmers with their sharpened stakes and silver bullets in their squirrel rifles.

“What kind of crops do your folks raise—tobacco or cotton?”

“They don’t raise nothing yet. We just came here.”

“Oh.” That was all right: she didn’t have a mountain accent. Come to think of it, she was a little more dignified than most of the children he’d met in this neighborhood. “Isn’t it a little late to go for a stroll? Aren’t your folks afraid to let you out this late with a vampire around?”

She shivered. “I—I’m careful,” she said at last.

Hey! Shellinger thought. Here was the human angle. Here was what Randall was bleating about. A frightened little girl with enough curiosity to swallow her big lump of fear and go out exploring on this night of all others. He didn’t know how it fitted, just yet—but his journalistic nose was twitching. There was copy here; the basic, colorful human angle was sitting fearfully on his red leather seat.

“Do you know what a vampire is?”

She looked at him, startled, dropped her eyes and studied her folded hands for words. “It’s—it’s like someone who needs people instead of meals.” A hesitant pause. “Isn’t it?”

“Ye-es.” That was good. Trust a child to give you a fresh viewpoint, unspoiled by textbook superstition. He’d use that “People instead of meals.” “A vampire is supposed to be a person who will be immortal—not die, that is—so long as he or she gets blood and life from living people. The only way you can kill a vampire—”

He pointed the car into the little branchlet of side road. It was annoyingly narrow; surprised wet boughs tapped the windshield, ran their leaves lazily across the car’s fabric top. Once in a while, a tree top sneezed collected rain water down.

Shellinger pressed his face close to the windshield and tried to decipher the picture of brown mud amid weeds that his headlights gave him. “What a road! Your folks are really starting from scratch. Well, the only way to kill a vampire is with a silver bullet. Or you can drive a stake through the heart and bury it in a crossroads at midnight. That’s what those men are going to do tonight if they catch it.” He turned his head as he heard her gasp. “What’s the matter—don’t you like the idea?”

“I think it’s horrid,” she told him emphatically.

“Why? How do you feel—live and let live?”

She thought it over, nodded, smiled. “Yes, live and let live. Live and let live. After all—” She was having difficulty finding the right words again. “After all, some people can’t help what they are. I mean,” very slowly, very thoughtfully, “like if a person’s a vampire, what can they do about it?”

“You’ve got a good point there, kid.” He went back to studying what there was of the road. “The only trouble’s this: if you believe in things like vampires, well, you don’t believe in them good—you believe in them nasty. Those people back in the village who claim three children have been killed or whatever it was by the vampire, they hate it and want to destroy it. If there are such things as vampires—mind you, I said ‘if’—then, by nature, they do such horrible things that any way of getting rid of them is right. See?”

“No. You shouldn’t drive stakes through people.”

Shellinger laughed. “I’ll say you shouldn’t. Never could like that deal myself. However, if it were a matter of a vampire to me or mine, I think I could overcome my squeamishness long enough to do a little roustabout work on the stroke of twelve.”

He paused and considered that this child was a little too intelligent for her environment. She didn’t seem to he bollixed with superstitions as yet, and he was feeding her Shellinger on Black Magic. That was vicious. He continued, soberly, ” The difficulty with those beliefs is that a bunch of grown men who hold them are spread across the countryside tonight because they think a vampire is on the loose. And they’re likely to flush some poor hobo and finish him off gruesomely for no other reason than that he can’t give a satisfactory explanation for his presence in the fields on a night like this.”

Silence. She was considering his statement. Shellinger liked her dignified thoughtful attitude. She was a bit more at ease, he noticed, and was sitting closer to him. Funny how a kid could sense that you wouldn’t do her any harm. Even a country kid. Especially a country kid, come to think of it, because they lived closer to nature or something.

He had won her confidence, though, and consequently rewon his. A week of living among thin-lipped ignoramuses who had been not at all diffident in showing their disdain had made him a little uncertain. This was better. And he’d finally got a line on the basis of a story.

Only, he’d have to dress it up. In the story, she’d be an ordinary hillbilly kid, much thinner, much more unapproachable; and the quotes would all be in “mountain” dialect.

Yes, he had the human interest stuff now.

She had moved closer to him again, right against his side. Poor kid! His body warmth made the wet coldness of her jeans a little less uncomfortable. He wished he had a heater in the car.

The road disappeared entirely into tangled bushes and gnarly trees. He stopped the car, flipped the emergency back.

“You don’t live here? This place looks as if nothing human’s been around for years. ”

He was astonished at the uncultivated desolation. “Sure I live here, mister,” her warm voice said at his ear. “I live in that little house over there.”

“Where?” He rubbed at the windshield and strained his vision over the sweep of headlight. “I don’t see any house. Where is it?”

“There.” A plump hand came up and waved at the night ahead. “Over there.”

“I still can’t see—” The corner of his right eye had casually noticed that the palm of her hand was covered with fine brown hair.

Was covered with fine brown hair. Her palm!

“What was that you remembered about the shape of her teeth?” his mind shrieked. He started to whip his head around, to get another look at her teeth. But he couldn’t.

Because her teeth were in his throat.