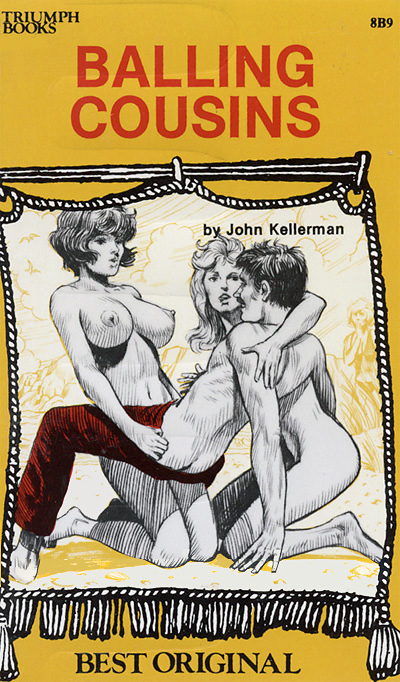 When I glanced up into the rear-view mirror, I could see Jim already had his hand inside Teeny's blouse and was fondling one of her firm tits feverishly. It just made my aching cock get that much stiffer and I thought for sure my hard-on was going to split my pants if I didn't get some relief soon. I looked over at the girl sitting coyly at my side, and shifted closer to her, my eyes riveted to her big boobs. Trying to appear nonchalant, I put one arm around her plump shoulders and hugged her close, letting my other hand creep stealthily up between us and fumble with a blouse button.

Bonnie drew back then and said a little sharply, "Hey, whatta you doing, Ross?"

"You're so pretty that I just wanted to see more, I guess."

Even though it had been a stone lie, Bonnie laughed appreciatively and I used the moment to snuggle my mouth into the fragrant plumpness of her neck. Bonnie wasn't really all that beautiful. But it was a common fact that she would fuck. Fucking seemed utmost in my mind lately. Mainly because I was eighteen and hadn't even gotten my first piece of ass. To make matters more critical, my old man was getting me out of town for a month so I could "think things over", as he put it. I always dug the family cabin, but there'd be no chance at all of me getting any pussy up there. So, with time running out I'd driven to the A amp; W a couple of days before when Bonnie was getting off her shift. She'd readily agreed to go out with me.

Bonnie had quit high school halfway through her senior year when an unknown member of the football squad had knocked her up. The kid had been put up for adoption, and now Bonnie lived with an aging aunt in a rambling clapboard across the street from the Coca-Cola bottling plant. And it was in that house, the very one I was parked in front of, where Bonnie had given in to a lot of pretty flimsy arguments. Since I knew the guys concerned, I was sure you didn't have to be a lawyer to get Bonnie to put out. Her aunt was always in bed early, and there was a big soft sofa downstairs.

I decided to try the blouse button one more time, but before I could get it loose, Bonnie twisted clear away.

"Hey, Ross, is it true that your dad is going to send you to college next fall?"

"That's his version," I said, licking up under her plump earlobe. At a time like this I didn't want to think about the hassles I'd be getting into over what my dad wanted me to do and what I wanted to do.

"I heard from your sis that he wants you to learn pharmacy and take over the business someday, huh?"

I stopped kissing her and sat back in the seat. "My sister has a big mouth. But yeah, that's the general idea. Sounds exciting, doesn't it? Running a Goddamned drug store."