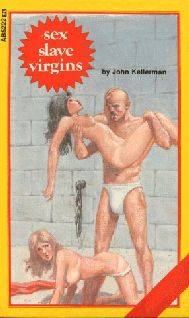 "I dare you," Teresa said, her eyes sparkling with mischief. Mary swallowed and found her mouth dry. But the clerk had gone in back to hunt for the film Mary had asked for. She stepped behind the counter, opened the glass case and quickly stuffed a long, cardboard box into her beach bag. When the man came back, the two of them were standing innocently by the cash register.

"Sorry, Miss, I don't have any pictures for anyone by the name of Carter."

"Thanks anyway," Mary said, moving towards the door. She didn't want to spend another minute in that place. She felt all tingly and breathless and when Teresa giggled as they went out, Mary gave her a push.

"You always try to mess me up," she said, laughing now that they pulled off the small theft successfully.

Both girls were wearing bikinis and a boy in a car gave a little honk as he passed them. They'd taken the bus to the small beach town at the end of the line, something they often did during the summer. Teresa was Mary's best friend. And during most of that friendship, they took turns daring each other to new and ridiculous feats. Mary tossed her blonde hair back from her face and tried to relax. It was the first time she'd actually stolen something. But more than that, she was nervous over what she'd taken from inside the glass case.

"I can't wait to see it," Teresa whispered. She was half a head taller than Mary, a leggy, raven-haired girl with a near perfect figure. Her tits were about the size of oranges and they rode high and firm on her chest. The skimpy bikini top cut low across her perfect jugs.

Mary wasn't so well endowed when it came to tit size. Nor did she have the willowy limbs and loose way of walking that Teresa had developed. Mary was a natural blonde with a round face and short nose. Freckles seemed to be spattered everywhere on her body. The cups of her bikini weren't nearly so large as Teresa's. But they didn't have to be. Mary's tits were small, white and soft, hardly large enough to be called more than swells. But her nipples were especially sensitive. The tiny pink nubs were a constant pleasure to Mary. On her fourteenth birthday she'd discovered that a little soapy water and the palm of her hand could make her breathlessly excited. And touching them always had an incredible effect upon her cunt. Now she was a bit older and though her breasts had not grown much, her nipples had become somewhat larger and lots more sensitive. A week before, she'd actually made herself come by massaging and pinching her nipples. She hadn't told Teresa yet.

"Ohhh, let me see it!" her dark-haired friend hissed.

"Not here. Let's get down to the beach."