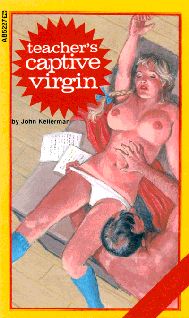 Amanda heard the low moan from the seat behind her, but she didn't dare turn to take a look. She knew who were back there. Rhonda Peters, her very best friend, and Rhonda's boyfriend. One of her boyfriends. The guy's name was Jim, and he'd been following Rhonda around for months. He'd even joined the Outdoors Club so he could be around her. Amanda wasn't sure he really gave a damn about being outdoors and taking hikes and all that sort of thing.

"Ohhhh," the sigh came again. Unmistakably Rhonda. She even sighed like that when she was talking about sex, much less engaging in it. Amanda shivered, trying to imagine just exactly what was going on back there. Every so often, Mr. Walker glanced in the rear-view mirror. His eyes met hers and Amanda felt an odd flush and blinked rapidly before smiling and looking away.

It had to be her imagination, but she thought Mr. Walker had been watching her more than usual lately. Of course he was responsible for everyone on this outing to the mountains. He was in charge of the Outdoors Club. He was also the coach for Balford High School. They were in his station wagon, all six of them, not counting Mr. Walker's wife, who was bent over a road map with her flashlight in the seat beside him.

"There's a restaurant and gas station," Mrs. Walker was saying. "Why don't we step and let the kids stretch and get a snack?"

As Mr. Walker slowed and a passing truck blasted by with its lights blaring, Amanda pretended to stretch, turning just enough to catch a quick glance at Rhonda and Jimmy. She caught a look of her friend's bare thighs, her rumpled skirt and partly unbuttoned blouse. But in that fleeting moment, she caught more too. She had seen how. Rhonda's panty crotch was pulled to the side to expose her plump, darkly fringed cunt lips. There'd been a glossy wetness there, and as Jimmy's hand had quickly withdrawn, Amanda was certain abet seen the same shiny wetness covering his knuckles. This peek into intimacy made Amanda's heart pound furiously. She felt the urgent need to pee.

When she glanced to the side where Sal Dawson was yawning and blinking his eyes, she noticed how tight his jeans looked at the crotch. With a start, she realized that the boy had a hard-on. Rhonda had spent many hours telling her about such miracles as that. Amanda, though, had never laid eyes on an honest-to-god male cock. Not in the flesh.

"Okay, kids," Mrs. Walker was chirping. "Get out and stretch. We'll meet you in the coffee shop over there."

Everybody piled out of the station wagon except Rhonda and Jimmy. Amanda was having a hard time keeping her mind off what she'd just seen. She wandered back behind the car, keeping her eyes on the back window. Rhonda had her arms around Jim's neck, and they were kissing like people did on the day-time soap operas. Jim moved his head around a lot, and so did Rhonda. For an instant, Amanda glimpsed her friend's pink tongue exchanging wetness with the eager young man whose hands always seemed to be moving. Then, the black-haired beauty threw her head back to expose her long, graceful neck. Amanda edged closer to the station wagon. They seemed too involved in what they were doing to notice her.