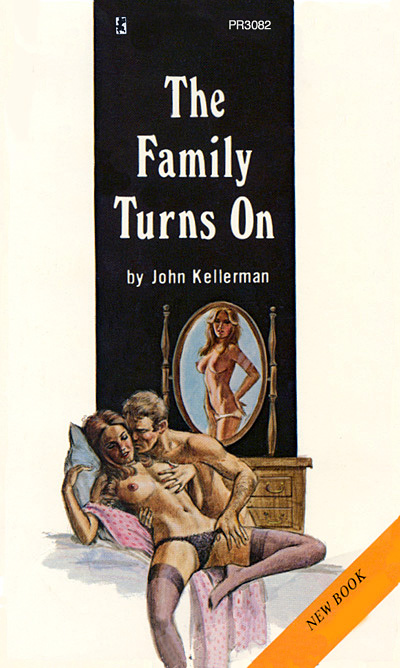 The family turns on

The family turns on

"Don't be such a slug in the mud," she scolded, turning to the window again. Their bedroom overlooked the back yard and swimming pool. Ronnie could see her aunt talking to the young man who'd come to clean the pool. She had her hand on his shoulder now and was leaning forward slightly so that her big breasts threatened to break out of her skimpy red bikini. Roslyn was a tall, handsome woman. She'd kept her body together through the years and now though she was close to forty, she looked terrific. Her hair was somewhere between red and blond and she wore it long. When she had a couple of drinks in her Roslyn could get pretty wild. When she had a couple more she could border on the pornographic. Ronnie wondered how many she'd had this morning. The pool-cleaning boy looked a bit nervous. He kept glancing around like he expected a husband to break out of the house at any moment. This woman was really loaded and she was com ing on to him a little too hot and heavy for comfort. He had no need to worry. Evan Henderson was safely out of the way at his successful law office in Whittaker.

"I mean, Aunt Roslyn didn't invite us up here to spy on her," Josie kept on. She was pacing now. A bad sign, Ronnie remembered. Josie was the nervous type when it came to anything of a sensual nature.

"Oh come on, Josie. You won't go to hell for a little peek. All humans love to be voyeurs." Ronnie got her Nikon from the bed table and fit a telephoto lens into the camera body. Josie watched her with wide, innocent-blue eyes.

"You're not going to take a picture of her!"

"Just for my private collection. I am a photographer after all. At least that's what I want to be." Ronnie was well aware that her blond sister didn't approve of her choice of hobbies. Josie always accused her of invading other people's privacy… or worse. Ronnie aimed the Nikon at Josie just as she turned by a sunlit window. The shutter fluttered and Josie's white face reddened.

"There you go again!" she snapped.

"Oh get off it. You know you love to look at pictures of yourself." And it was true. Josie was a beauty and knew it. At eighteen her complexion was like milk. She had a smattering of freckles across her short nose but the rest of her was a creamy and delicate white. She had firm, high-riding breasts, just as white as the rest of her. Only the small nipples were tipped with pink. Pink the same color as the inner surfaces of her cunt. To Ronnie who had an olive complexion, her sister's skin was a wonder. She loved to take pictures of her with as little on as possible. Josie had a model's willowy body. But it was hard to get the shy blond to unpeel much more than her sunglasses.

Only once had Ronnie talked her into doing a semi-nude thing. And even then Josie had insisted on wearing her panties. Panties which were another source of teasing for Ronnie to draw on. Because Josie wore only pink panties trimmed with white lace. They were very delicate and feminine and each pair had her name embroidered into the sheer material. Ronnie had caught her without them only once. She'd surprised Josie while she'd been drying after a hot tub. The Nikon had clattered three times before the blushing blond had wrapped the towel around her and fled to the safety of the bathroom again. Ronnie wondered if her young sister ever touched herself. And though she guessed that Josie did, there was really no certainty. Josie was that private.

Today the pretty Josie had on a knee-length blue dress. She liked blue. Light blue, pastel blue, sometimes even a dark navy. And with her cornfed looks, her blond bangs that just cleared those turquoise eyes, the blue did dangerous things to her overall appearance. Dangerous for her. Josie seemed to be totally innocent of her latent sexuality. No, Ronnie thought. It wasn't even latent any more. Not since she'd gotten so leggy and lithe.