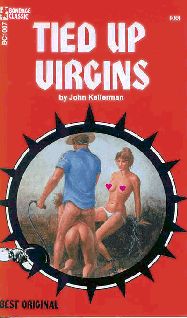 Jody stopped at the steps and put her bag down. It was hot and the air felt thick and hard to breathe. She wiped her forehead and waited for her lungs to catch up, thinking, thinking…

At least she wouldn't have to watch her mother anymore. Doing those things with strangers she picked up in the bars around Hallinsville. The judge had decided all that. Her mother had just shrugged and given her a pat. "Take care of yourself, sweetheart."

Sure. Jody chewed her bottom lip. Hadn't she always taken care of herself? Cooked for herself?

Mended her own clothes? But of course there had to be a place for her to stay. Guardians appointed by the court. And that's where Brit's folks had come in. Thank God for her best friend, Brit. Brit's family was pretty loose really. There'd been talk that the court wouldn't allow such a family to take in another child. But there had been extenuating circumstances. Mr. Russell, Brit's father, knew the judge. And the fact that she and Brit were such good friends had helped. Jody picked up her bag again and lugged it up the steps and into the small cabin.

The cabin was half a mile from the Russell house but still on their property. Mrs. Russell had agreed to let Brit stay there with Jody for the summer. It would get the girls out from under her feet and give them a little place of their own they could mess up to their hearts' content. Jody smiled, thinking of how lenient Brit's folks were with her.

There were two bunks in the small cabin, a table, an old stove. Jody straightened a minor on the wall and glanced at her reflection. Like Brit had kidded once, looking at that face was like looking at a color television. She had vivid red hair that was so frizzy she could hardly get a comb through it. She let it puff out down over her shoulders usually, braided it sometimes or tied a bandana around her forehead to mash it down a little. Today it was just fuzzing in the breeze. What little breeze there was.

"God, it's hot!" Jody opened a window and looked out through the orchard. She couldn't see the Russell house for the apple trees. Brit would be coming down with same of her things soon, Jody sat on the edge of the bed. Her underarms were getting her t-shirt wet. An impulse came over her and she took its hint. She snaked the t-shirt off over her head and tossed it aside. After all, they'd have all the privacy in the world. It was her first real place of her own, even though she was being taken in because of the benevolence of the Russell family and was in some way obligated to them.

Jody rubbed a hand across her belly. It was sweaty, too. She had a nice belly. Fleshed out enough to be what some men might call plush. And yet she wasn't overweight. She didn't even look plump. It was when she was beside her best friend, Brit, that the difference stood out. Really stood out, Jody thought, giggling, touching her breasts. They were full and round and rode high on her chest. Her nipples were as dark as her sunbaked skin and firm even when she wasn't thinking about… boys.

Jody let her fingers rub over one nipple, then moved to the other one. Her thighs were full too, not willowy and thin like Brit's. And her calves swelled against the legs of her jeans. Jody blinked her green eyes and undid the snap of her Levi's. She snaked them down too and then went to the window, feeling a little funny. But there was no one around. No one ever came down through the orchard to the little cabin. And on the other side of the cabin was a dense woods, almost a quarter mile of trees and scrub oak until one came to the highway and the garage Jeb Caruthers operated.