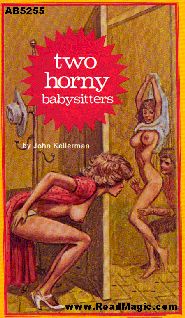 Terri felt as if her legs might not hold her up much longer. Her heart was jumping in her chest and her mouth was dry. It was hard not to moan like her older sister was doing. Terri couldn't afford to make a sound though. She was hidden in Arlene's closet. If Arlene caught her, she'd never be able to forget. Her sister would roast her alive.

"Ohhhhh," Arlene sighed, her hips dipping from side to side.

Terri swallowed hard. She was aware of her panties clinging to her cunt. Her cunt had grown very wet and it felt as if it were swelling open. Terri wondered if it might look like her sister's cunt looked now.

Arlene was on her back in the middle of her bed, She wore a short nightgown, but had stripped the panties off so she was naked from the waist down. Her knees were bent sharply back so that her heels nearly touched the pale, plump cheeks of her ass. Between her thighs, Terri could see the lush, red flesh of her big sister's pussy. The fringe of blonde hair on either side framing the glistening membranes, the hot, juice-drenched lips inside. Arlene's chest rose and fell rapidly and she began to squirm faster.

The sound Terri heard was her sister's finger sliding in and out of her cunthole. It was fantastically exciting to watch the length of that finger disappearing past the second knuckle between the slick folds of cuntflesh. Arlene opened her thighs a little more.

Terri hadn't meant to spy on something so intimate, so private, as what her older sister was doing now. She'd gone into Arlene's room to look for a pair of knee socks her sister was always borrowing. When she heard Arlene coming down the hail, she ducked into the closet, not wanting to be caught poking around where she wasn't welcome.

Now it was Arlene doing the poking around. Terri had never imagined that anything could be so sexy. She was pretty good at rubbing herself, but she'd only pushed the tip of her pinky into her tight, as yet unbroken, cunt.

"Uhhnn, uhhhhhhh!" Arlene gasped, twisting and thrusting, her finger sliding faster into the squishy, glistening opening below her cut. With her thumb, she caressed that sensitive nub. Terri knew about that magic spot!

It was her favorite place to touch. She always worked it into a frenzy when she woke up in the morning. And after breakfast, she'd usually indulge in another come before dressing. To watch Arlene finger-fuck her cunt was terribly thrilling. Terri wanted to skin off her panties and go at it herself.