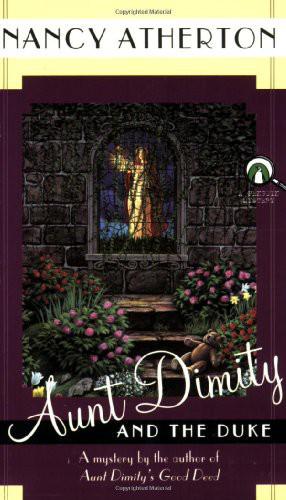 Aunt Dimity and the Duke

Aunt Dimity and the Duke
Emma Porter is forty, fat, frumpy, and a passionate amateur gardener. When her longtime lover dumps her for a younger woman, Emma escapes the cloying sympathy of family and friends by setting out on a summer-long driving tour of England's glorious gardens. A Dimity-contrived coincidence brings her to Penford Hall, a sprawling Gothic mansion in Cornwall, where she finds a duke in search of a missing lantern with extraordinary powers. Suspecting there's more than one mystery to be solved at Penford Hall, Emma accepts the duke's invitation to stay on and restore the once glorious chapel garden to its former beauty. The dark rumors surrounding a rock star and the near-death of the duke's beautiful cousin confirm Emma's suspicions, and set her--with Aunt Dimity's ghostly guidance--on the path to Penford Hall's secrets and the pleasure of unexpected love. 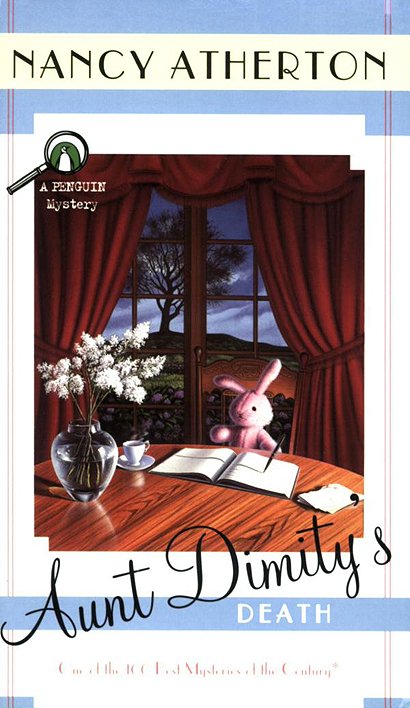 Aunt Dimitys Death
...Until the Dickensian law firm of Willis & Willis summons her to a reading of the woman's will. Down-on-her-luck Lori learns she's about to inherit a siazable estate--if she can discover the secret hidden in a treasure trove of letters in Dimity's English country cottage. What begins as a fairy tale becomes a mystery--and a ghost story--in an improbably cozy setting, as Aunt Dimity's indominable spirit leads Lori on an otherworldly quest to discover how, in this life, true love can conquer all. From Publishers Weekly Despite its buoyant tone, this blend of fairy tale, ghost story, romance and mystery proves a disappointment. First novelist Atherton creates a potentially appealing heroine in bewitched and bewildered Lori Shepherd, but never places her in danger, thus sacrificing suspense. Recently divorced and newly bereaved by her beloved mother's death, Lori is scraping by as an office temp in Boston when she receives a letter from a Boston law firm informing her of the death in England of Miss Dimity Westwood. Lori is shocked because she had thought adventurous Dimity was her mother's fictional creation, the star of made-up bedtime stories. Courtly lawyer William Willis and his attentive son Bill inform Lori that Dimity left instructions that she and Bill go to her Cotswolds cottage to prepare a collection of "Aunt Dimity" stories for publication. They find the cottage haunted by the ghost of Dimity, who blocks their efforts to trace the secret of her WW II romance with a gallant flier. That all ends happily comes as a surprise to none but Lori. 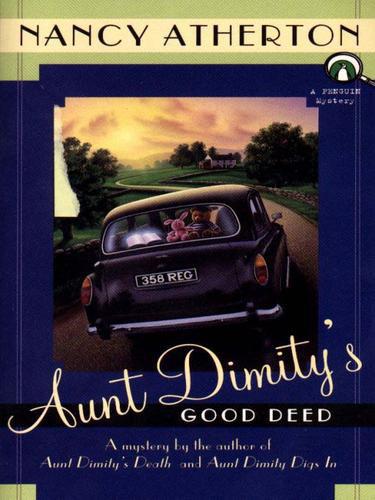 Aunt Dimitys Good Deed
Nancy Atherton's growing number of fans will certainly be delighted by Aunt Dimity's latest appearance in the honey-colored English cottage she bequeathed to her "niece," Lori Shepherd. Thanks to Aunt Dimity, Lori's life has taken on fairy-tale proportions: she's financially set for life and happily married--or so she thinks. When Lori's plans for a second honeymoon to England with her workaholic husband fall through, she begrudgingly takes along her father-in-law--who promptly disappears, leaving behind a mysterious note. Inspired and guided by the ghost of Aunt Dimity and her inimitable blue journal, Lori's search for the elderly gentleman turns into a harrowing mission to uncover a centuries-old family secret--complicated by mistaken identities, falsified deeds, family feuds, and Lori's unseemly attraction to her husband's beguiling English cousin. In a delightful chase that takes her all over the English countryside, Lori discovers the true meaning of marital bliss, and Nancy Atherton's fans, new and old, will savor a masterpiece of old-fashioned fun. From Publishers Weekly If you're looking for arch, cancel the trip to Chartres. Here's the third in a pointedly cute series featuring the ghost of "Aunt" Dimity, the dead friend of heroine Lori Shepherd's mother. Lori plans a second honeymoon for herself and her overworked husband, lawyer Bill Willis, in the idyllic English cottage Lori inherited from Dimity (Aunt Dimity's Death, 1992). When a case keeps Bill in Boston, Lori heads overseas with her father-in-law, William Willis Sr. He suddenly disappears, taking Lori's pink flannel bunny, Reginald, and leaving an enigmatic note about family business. Further clues come from Dimity's ghost via her leather-bound journal, in which Lori observes Dimity's handwriting materialize on the page. Lori tracks Willis Sr., accompanied by her friend Emma's precocious 12-year-old stepdaughter, Nell, and Nell's teddy bear, Bertie, through the picturesque countryside to London. There she finds the British Willises?including sexy Gerald, efficient Lucy and bumbling Arthur?who are at odds, their family law firm in disarray. The plot hangs on an 18th-century feud that divided the family, resulting in murder and theft, and leading to present-day blackmail; the villain is easily identified. At the end of this amusing but silly tale, Bill and pregnant Lori move to England, delighting Aunt Dimity's ghost.