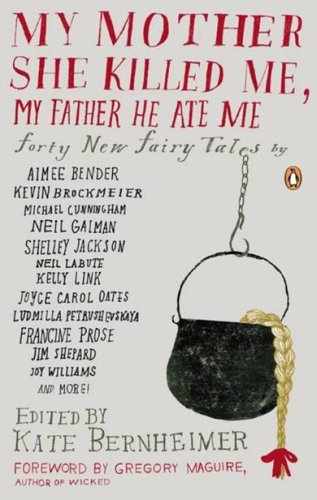 My Mother She Killed Me, My Father He Ate Me: Forty New Fairy Tales

My Mother She Killed Me, My Father He Ate Me: Forty New Fairy Tales
Michael Cunningham, Francine Prose, Aimee Bender, Kelly Link, Jim Shepard, and more than thirty other extraordinary writers celebrate fairy tales in this thrilling new volume. Inspire by everything from Hans Christian Andersen's "The Snow Queen" and "The Little Match Girl" to Charles Perrault's "Bluebeard" and "Cinderella" to the Brothers Grimm's "Hansel and Gretel" and "Rumpelstiltskin" to fairy tales by Goethe and Calvino and from China, Japan, Vietnam, Russia, Norway, and Mexico, here are stories that soar into boundless realms, filled with mischief and mystery and magic, and renewed by the lifeblood of invention. Although rooted in hundreds of years of tradition, they chart the imaginative frontiers of the twenty-first century as powerfully as they evoke our earliest encounters with literature.