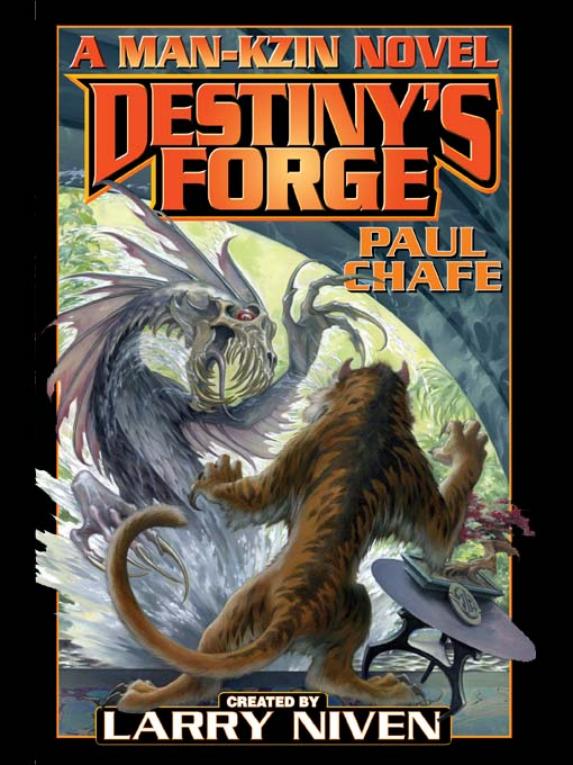 Destinys ForgeA ManKzin War Novel
For fifty thousand years the Kzinti Patriarchy thrived on battle fought for conquest. Against all odds the humans stopped them, and for five wars kept on stopping them. With its violent expansion checked internal strains have built up within the Patriarchy, and now they threaten to tear it apart. When the ambitious Kchula-Tzaatz makes a bid for ultimate power the established order comes tumbling down, and the flames of war burn hot in Destiny's Forge. Hammered on that Forge are; Major Quacy Tskombe, battle hardened warrior turned diplomat. His life is duty, his mission takes him to the Citadel of the Patriarch in a last ditch effort to avert war. When it all falls apart he's forced to choose between love and loyalty, with the fate of humanity hanging in the balance. Captain Ayla Cherenkova, starship commander. As talented as she is beautiful, her hatred of the Kzinti has driven her to the top. Her space combat genius is unmatched, but when she's trapped alone in the jungles of Kzinhome her survival will depend on a whole new skillset. Pouncer, First-Son-of-Meerz-Rritt, heir apparent to the galaxy's most powerful empire, now a nameless fugitive with the collapse of his father's dynasty. Survival demands escape, but honor demands vengeance, and the price of his Name will be paid in the blood of worlds. Paul Chafe presents a masterpiece in the grand tradition of epic science fiction. No fan of Larry Niven's best-selling Known Space series can miss Destiny's Forge.