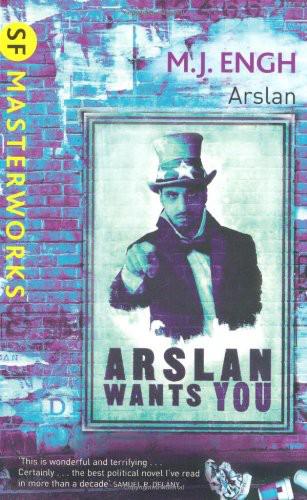 Arslan
Arslan is a young Asian general who conquers the world in a week without firing a shot and shortly thereafter sets up his headquarters in a small town in Illinois. And if this did occur, this is how it would happen. A masterpiece of political science fiction and a book to challenge such works as Ursula K. LeGuin’s The Dispossessed, Arslan is a book that others are now measured against. “It's about fathers and sons, about power, about a genuinely ruthless (but not unfeeling) mind in pursuit of a practical solution to the world's problems.” So M. J. Engh describes Arslan. This is a novel of power and depth that is unforgettable. A Classic of Political Science Fiction “Engh creates a truly shocking situation, introduces a monstrous character, and then refuses to satisfy any of the emotions he has aroused…. Engh’s performance is as perversely flawless as Arslan’s.” —The New York Times “Arslan starts with a strong science fiction premise—and then raises it to the level of the greatest tragedies. You will find surprises almost from the start, as Engh shatters the tired cliches of the genre. And by the end of the book, exhausted and fulfilled, you will realize you have read something that stands head and shoulders above the other fiction of its time.” —Orson Scott Card “This is wonderful and terrifying SF—terrifying because its premise, the takeover of the United States by a third-rate world power, is at once so preposterous and yet, in the hands of this highly-skilled writer, so stupefyingly believable. Certainly Arslan is the best political novel I’ve read in more than a decade.” —Samuel R. Delany