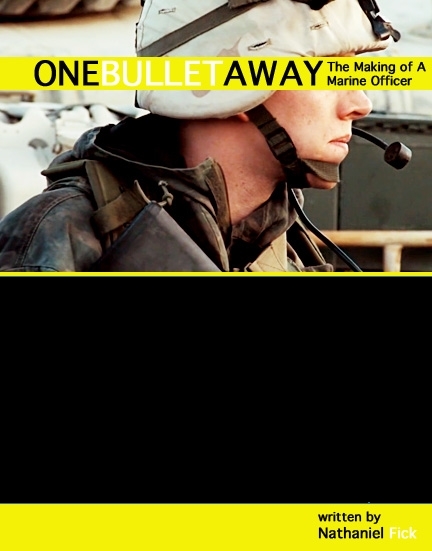 One Bullet Away
A former captain in the Marines’ First Recon Battalion, who fought in Afghanistan and Iraq, reveals how the Corps trains its elite and offers a point-blank account of twenty-first-century battle. If the Marines are “the few, the proud,” Recon Marines are the fewest and the proudest. Only one Marine in a hundred qualifies for Recon, charged with working clandestinely, often behind enemy lines. Fick’s training begins with a hellish summer at Quantico, after his junior year at Dartmouth, and advances to the pinnacle—Recon—four years later, on the eve of war with Iraq. Along the way, he learns to shoot a man a mile away, stays awake for seventy-two hours straight, endures interrogation and torture at the secretive SERE course, learns to swim with Navy SEALs, masters the Eleven Principles of Leadership, and much more. His vast skill set puts him in front of the front lines, leading twenty-two Marines into the deadliest conflict since Vietnam. He vows he will bring all his men home safely, and to do so he’ll need more than his top-flight education. He’ll need luck and an increasingly clear vision of the limitations of his superiors and the missions they assign him. Fick unveils the process that makes Marine officers such legendary leaders and shares his hard-won insights into the differences between the military ideals he learned and military practice, which can mock those ideals. One Bullet Away never shrinks from blunt truths, but it is an ultimately inspiring account of mastering the art of war. ‘The book’s enormous power derives from the quality of Fick’s writing and the intensity of his moral vision. The prose is terse, clean and unmannered, the eye misses nothing. An Afghan sunrise, an Iraqi slum, or a Marine Corps sergeant is drawn in a few words, the dialogue is sharp, and the action sequences tight and tense. Fick is especially good at conveying his own feelings in battle’. Ben Shepard, TLS ‘There is much of worth here. The author is… thoughtful, humane and reflective and has some keen insights. He is far from the mindless ‘gung ho’ marine of the movies and would be a good man to go to war with’. Herald on Sunday ‘A terrific account of basic training and active service… an excellent book which is timely and thought-provoking’. Glasgow Herald ‘Harrowing… deserves close reading and serious discussion’. The Washington Post ‘Fick’s descriptive and exacting writing… guarantees One Bullet Away a place in the war memoir hall of fame’. USA Today ‘One can hardly imagine a finer boots-on-the-ground chronicle of this open-ended conflict, no matter how long it may last’. Kirkus ‘One Bullet Away is a crisply written, highly readable, pacy march through the life of a combat leader. In each page, the reader can smell the cordite and see the chaos of combat, yet can also feel a tangible sense of the ethos and very essence not only of the United States Marine Corps but also of leadership, both at the military and the human level’. RUSI Journal