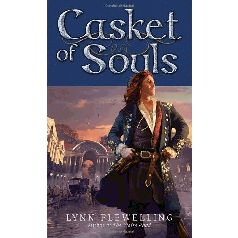 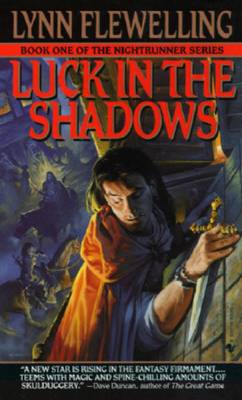 Luck in the Shadows

Luck in the Shadows
When young Alec of Kerry is taken prisoner for a crime he didn't commit, he is certain that his life is at an end. But the one thing he never expected was his cellmate. Spy, rogue, thief, and noble, Seregil of Rhнminee is many things—none of them predictable. And when he offers to take on Alec as his apprentice, things may never be the same for either of them. Soon Alec is traveling roads he never knew existed, toward a war he never suspected was brewing. Before long he and Seregil are embroiled in a sinister plot that runs deeper than either can imagine, and that may cost them far more than their lives if they fail. But fortune is as unpredictable as Alec's new mentor, and this time there just might be… DEADLY MISSION "Looks like you'll have to climb," Seregil whispered, squinting up. "Be careful going over; most of these places have the walls topped with spikes or sharp flints." "Hold on!" Alec tried to make out Seregil's expression through the darkness. "Aren't you coming with me?" "It's a one-man job; the fewer the better," Seregil assured him. "Would I send you in alone if I didn't think you could handle it? Best leave your sword, though." "What if someone sees me?" "Honestly, Alec! You can't just go hacking your way out of every difficult situation that arises. It's uncivilized." Alec unbuckled his sword and started up the garden wall. He was halfway to the top when Micum called softly, "We'll meet you back here when you've finished. Oh, and look out for the dogs." "Dogs?" Alec dropped down again. "What dogs? You didn't say anything about dogs!" Seregil tapped himself sharply between the eyes. "Illior's Fingers, what am I thinking of tonight? There's a pair of Zengati hounds, snow-white and big as bears." "That's a fine detail to forget," growled Micum. "Anything else I should know?" "Let's see, the spikes, the dogs, the servants—No, I think we covered it. Luck in the shadows, Alec." "And to you," Alec muttered, starting up the wall again. Praise for Luck in the Shadows by Lynn Flewelling "Part high fantasy and part political intrigue, Luck in the Shadows makes a nice change from the usual muck of contemporary sword-and-sorcery. I especially enjoyed Lynn Flewelling's obvious affection for her characters. And at unexpected moments she reveals a well-honed gift for the macabre." – Stephen R. Donaldson, author of This Day All Gods Die "Memorable characters, an enthralling plot, and truly daunting evil. The magic is refreshingly difficult, mysterious, and unpredictable. Lynn Flewelling has eschewed the easy shortcuts of cliched minor characters and cookie-cutter backdrops to present a unique world peopled by characters who are truly of that world. I commend this one to your attention." – Robin Hobb, author of Royal Assassin "A splendid read, filled with magic, mystery, adventure, and taut suspense. Lynn Flewelling, b ravo!Nicely done." – Dennis L. McKiernan, author of The Dragonstone "An engrossing and entertaining debut novel. It opens up a new fantasy world that is ripe for exploration-full of magic, intrigues, and fascinating characters… the kind of book you settle down with when you want a long, satisfying read." – Michael A. Stackpole, author of Star Wars X-Wing: Rogue Squadron 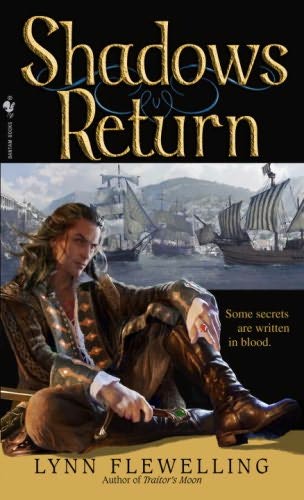 Shadows Return
With their most treacherous mission yet behind them, heroes Seregil and Alec resume their double life as dissolute nobles and master spies. But in a world of rivals and charmers, fate has a different plan.… After their victory in Aurënen, Alec and Seregil have returned home to Rhíminee. But with most of their allies dead or exiled, it is difficult for them to settle in. Hoping for diversion, they accept an assignment that will take them back to Seregil's homeland. En route, however, they are ambushed and separated, and both are sold into slavery. Clinging to life, Seregil is sustained only by the hope that Alec is alive. But it is not Alec's life his strange master wants—it is his blood. For his unique lineage is capable of producing a rare treasure, but only through a harrowing process that will test him body and soul and unwittingly entangle him and Seregil in the realm of alchemists and madmen—and an enigmatic creature that may hold their very destiny in its inhuman hands…. But will it prove to be savior or monster? 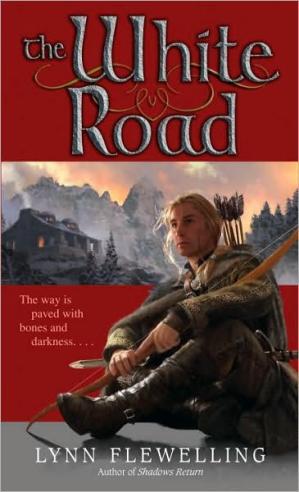 The White Road
Dissolute nobles, master spies, and the unlikeliest of heroes, Alec and Seregil have survived exile, treachery, and black magic. But the road that lies ahead is the most hazardous they've ever traveled. For with enemies on all sides, they must walk a narrow path between good and evil where one misstep might be their last. Having escaped death and slavery in Plenimar, Alec and Seregil want nothing more than to go back to their nightrunning life in Rhíminee. Instead they find themselves saddled with Sebrahn, a strange, alchemically created creature - the prophesied 'child of no woman.' Its moon-white skin and frightening powers make Sebrahn a danger to all whom Alec and Seregil come into contact with, leaving them no choice but to learn more about Sebrahn's true nature. With the help of trusted friends and Seregil's clan, the duo set out to discover the truth about this living homunculus - a journey that can lead only to danger or death. For Seregil's old nemesis Ulan í Sathil of Virèsse and Alec's own long-lost kin are after them, intent on possessing both Alec and Sebrahn. On the run and hunted, Alec and his comrades must fight against time to accomplish their most personal mission ever. 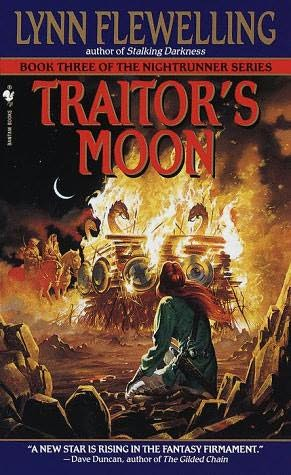 Traitors Moon
Seregil and Alec have spent the last two years in self-imposed exile, far from their adopted homeland, Skala, and the bitter memories there. But their time of peace is shattered by a desperate summons from Queen Idrilain, asking them to aid her daughter on a mission to Aurenen, the very land from which Seregil was exiled in his youth.