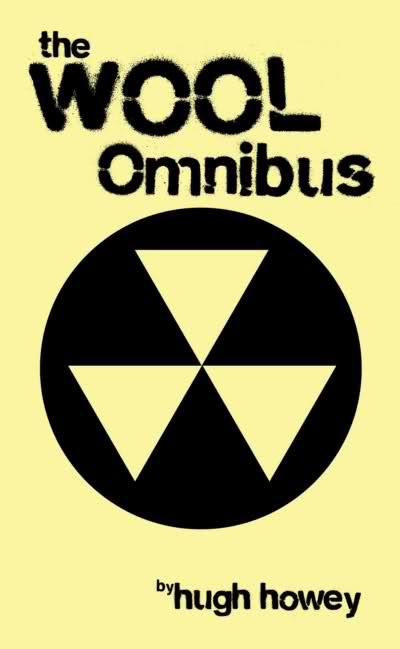 Wool Omnibus Edition (Wool 1-5)
This Omnibus Edition collects the five Wool books into a single volume. It is for those who arrived late to the party and who wish to save a dollar or two while picking up the same stories in a single package. The first Wool story was released as a standalone short in July of 2011. Due to reviewer demand, the rest of the story was released over the next six months. My thanks go out to those reviewers who clamored for more. Without you, none of this would exist. Your demand created this as much as I did. This is the story of mankind clawing for survival, of mankind on the edge. The world outside has grown unkind, the view of it limited, talk of it forbidden. But there are always those who hope, who dream. These are the dangerous people, the residents who infect others with their optimism. Their punishment is simple. They are given the very thing they profess to want: They are allowed outside. 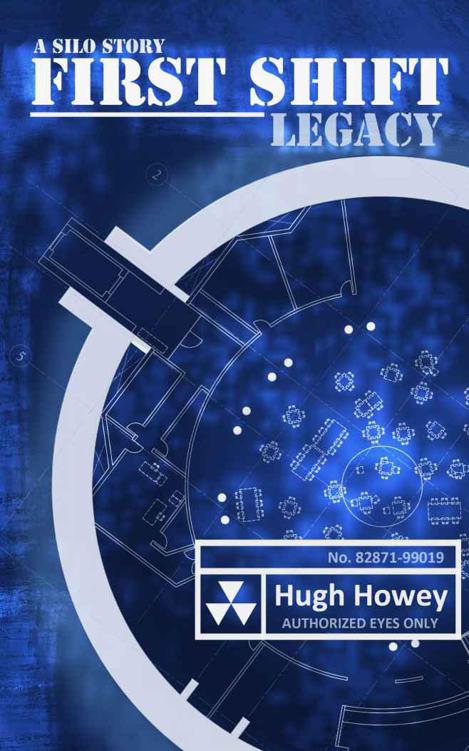 First Shift: Legacy
In 2007, the Center for Automation in Nanobiotech (CAN) outlined the hardware and software platform that would one day allow robots smaller than human cells to make medical diagnoses, conduct repairs, and even self-propagate. In the same year, the CBS network re-aired a program about the effects of propranolol on sufferers of extreme trauma. A simple pill, it had been discovered, could wipe out the memory of any traumatic event. At almost the same moment in humanity’s broad history, mankind had discovered the means for bringing about its utter downfall. And the ability to forget it ever happened. “These books by Hugh Howey absolutely define page-turner! ‘First Shift’ is part 6 in the Silo Series, a prequel to Wool 1-5.” M. Vernau 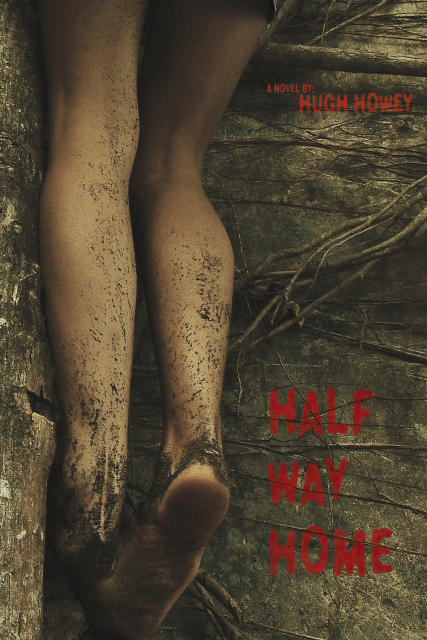 Half Way Home
Less than sixty kids awaken on a distant planet. The colony ship they arrived on is aflame. The rest of their contingent is dead. They've only received half their training, and they are being asked to conquer an entire planet. Before they can, however, they must first survive each other. In this gritty tale of youths struggling to survive, Hugh Howey fuses the best of young adult fantasy with the piercing social commentary of speculative fiction. The result is a book that begs to be read in a single sitting. An adventurous romp that will leave readers exhausted and begging for more. 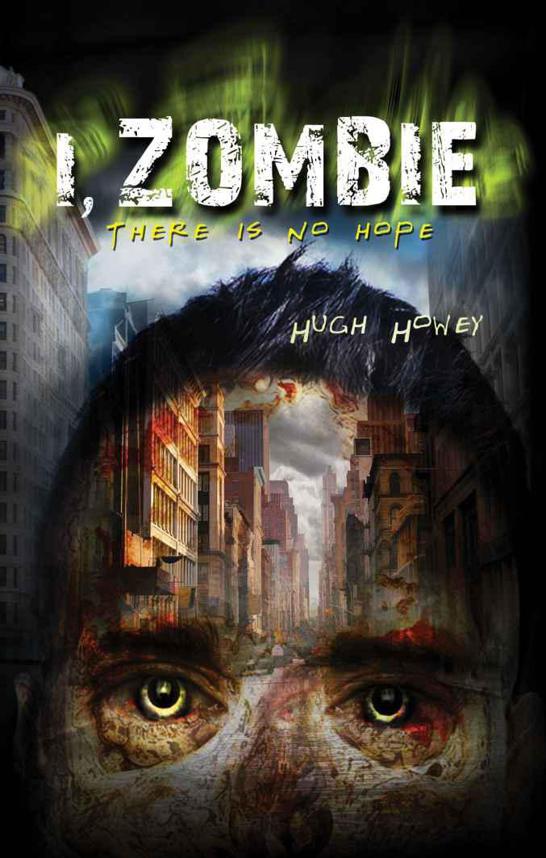 I, Zombie
***WARNING: NOT FIT FOR HUMAN CONSUMPTION*** This book contains foul language and fouler descriptions of life as a zombie. It will offend most anyone, so proceed with caution or not at all. And be forewarned: This is not a zombie book. This is a different sort of tale. It is a story about the unfortunate, about those who did not get away. It is a human story at its rotten heart. It is the reason we can’t stop obsessing about these creatures, in whom we see all too much of ourselves. 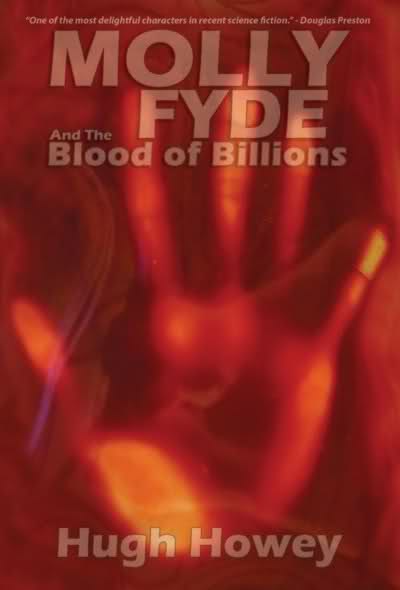 Molly Fyde and the Blood of Billions

Molly Fyde and the Blood of Billions
It’s been ten years since Molly last set foot on her birth planet, and this isn’t how she’d imagined her homecoming. The sky is full of an invading fleet, one powerful enough to threaten the entire galaxy. The new family she has come to rely on—her crew of alien misfits and runaways—are scattered in three directions. As they struggle to reunite, events beyond their control seem to be driving more than just them apart: the universe itself may be torn asunder if the bond between these unlikely heroes is broken. 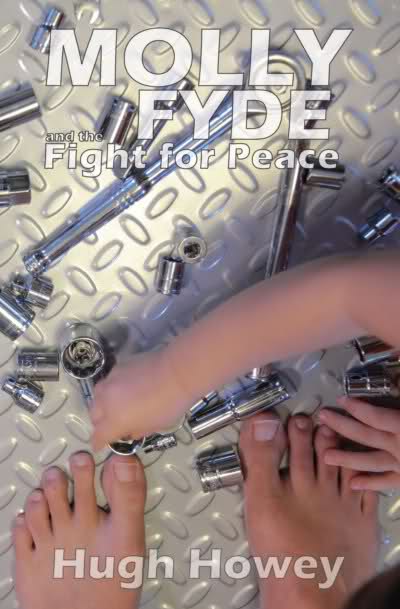 Molly Fyde and the Fight for Peace

Molly Fyde and the Fight for Peace
In just a few short weeks, a group of young orphans have come together to form a family. They have united in the most unlikely of alliances, finding strength in the tight bonds of friendship. In their individual cultures, these orphans were seen as children. At best, they were ignored by their elders. At worse, they are treated as nuisances, told what they could and could not do. But no one ever told them they couldn’t save the universe. Nobody knew they would ever get the chance… 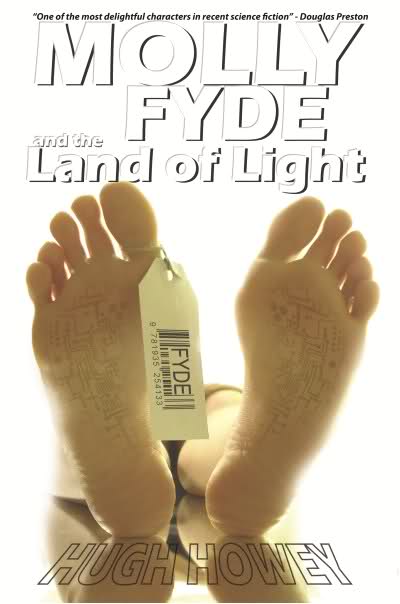 Molly Fyde and the Land of Light

Molly Fyde and the Land of Light
“I need you to help me rescue your father_” With those words, Molly Fyde—and the rest of the known universe—will never be the same. What began as a simple task to retrieve her father’s spaceship, has turned into more than Molly bargained for. Setting off to reconnect with her past, she is about to meet it in a way she never expected: Head-on. Her father is alive. Her mother’s memories are trapped inside the very ship which bears her name. On the run from her own Navy, Molly and her crew are now tasked with the impossible: Rescue her parents. Save the galaxy. End a war. But before they can attempt such heroics, Molly must first save a friend. One of her crew members is in trouble, their life hanging by a thread. And the only race of people Molly can turn to just happens to be the very aliens she’s been raised to fear, trained to meet in battle. Drenard. Homeworld of humanity’s sworn enemy. And the next stop for the starship Parsona. 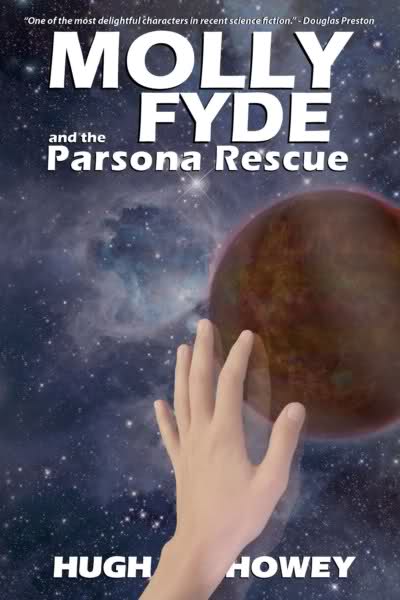 Molly Fyde and the Parsona Rescue
Growing up an orphan in the Milky Way hasn’t been easy, especially as a teenage girl in the Naval Academy. Unfortunately for Molly Fyde, things are about to get worse. Just as she’s finding her place amongst the boys, her unfair expulsion from the Academy takes away the only two things that truly matter: flying in space and her training partner, Cole. Sent off to a normal school, she feels destined for a dull, unspectacular future. Then, a marvelous discovery changes everything: Her father’s old starship, missing for a decade, turns up halfway across the galaxy. Its retrieval launches Molly and Cole on the adventure of a lifetime, one that will have lasting consequences for themselves and billions of others. What starts off as a simple quest to reconnect with her past, ends up forging a new future. And the forgotten family she hoped to uncover is replaced by a new one she never foresaw: a band of alien misfits and runaways—the crew of the starship Parsona. 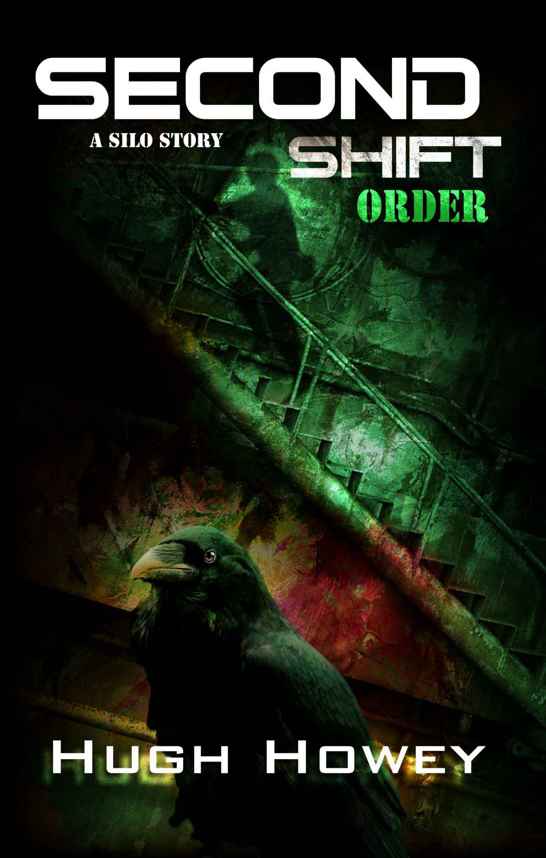 Second Shift - Order
The incredible second part of Shift, the follow up to bestseller Wool. Donald wasn’t supposed to remember. In fact, he was punished for doing just that. But the information he should have forgotten may end up saving his future. Mission Jones is a young man who wants to change the world around him. The rules, the secrets, the lies. Putting his own life on the line, he fights to build a resistance and save those who have hope. But is he trying to save the wrong people? Donald knows the truth, but is he willing to use it to protect something that he regrets building in the first place? 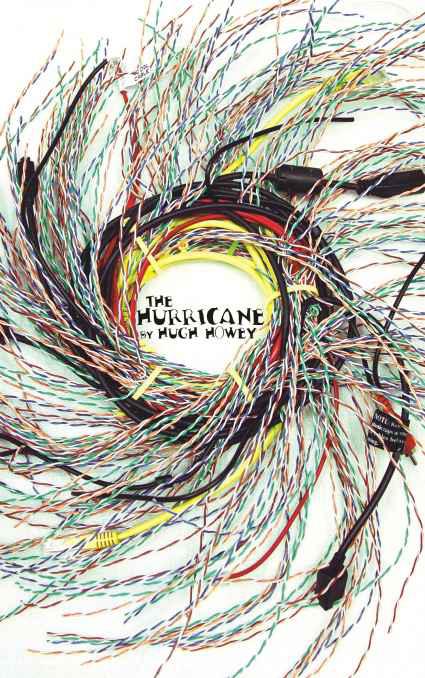 The Hurricane
Daniel Stillman's Life: 42 Facebook friends 18 Cell phone contacts 6 Twitter followers 4 blog subscribers Now a category five storm is about to take this all away. And replace it with a neighbor he's never met. 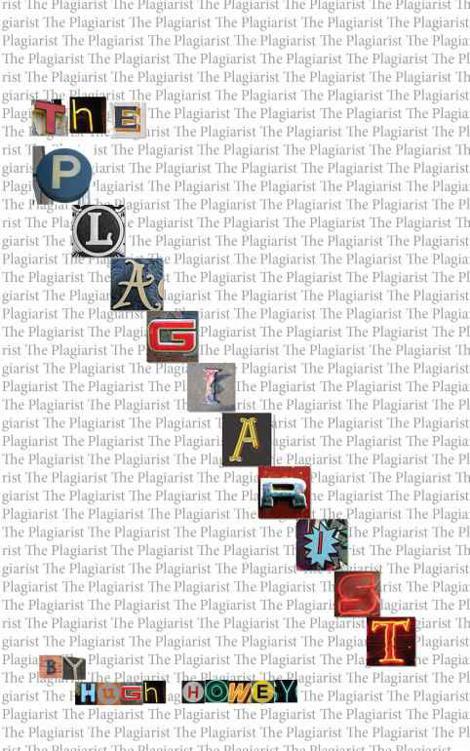 The Plagiarist
Adam Griffey is living two lives. By day, he teaches literature. At night, he steals it. Adam is a plagiarist, an expert reader with an eye for great works. He prowls simulated worlds perusing virtual texts, looking for the next big thing. And when he finds it, he memorizes it page by page, line by line, word for word. And then he brings it back to his world. But what happens when these virtual worlds begin to seem more real than his own? What happens when the people within them mean more to him than flesh and blood? What happens when a living thing falls in love with someone who does not actually exist? 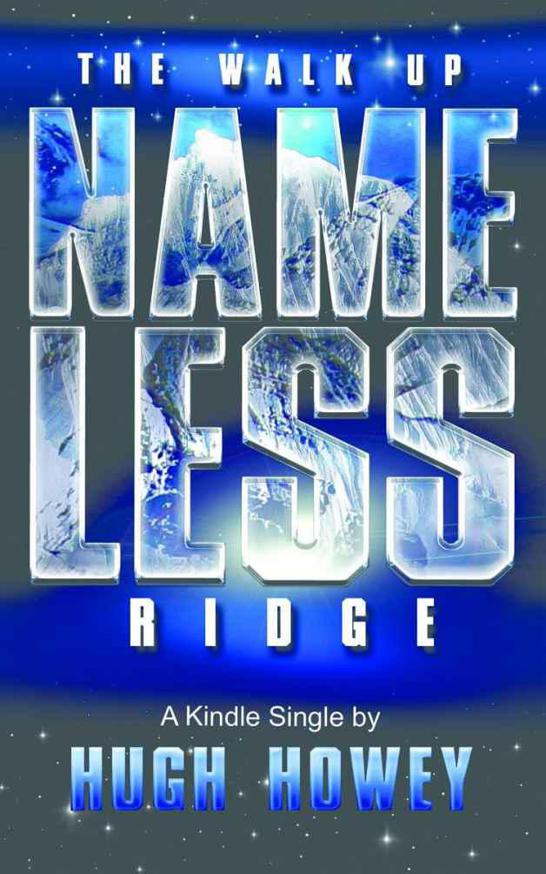 The Walk Up Nameless Ridge

The Walk Up Nameless Ridge
On planet Eno, there stands a mountain that has never been summited. Many have tried. All have failed. This climbing season finds three teams making their bid up this murderous peak. And one man among them will discover these ugly truths: There are fates worse than death. There are fates worse than obscurity. To be remembered forever can be its own curse. http://www.youtube.com/watch?v=Ksf2F268jx4 — Hugh Howey Reads "The Walk Up Nameless Ridge" at WorldCon 2012 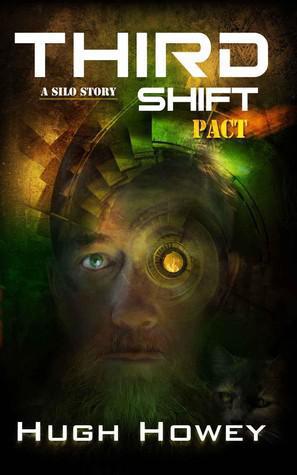 Third Shift - Pact
The third and final chapter of the Shift saga. This is part 8 of the Silo Series, which began with Wool. All three Shift books will be collected in an Omnibus edition to save the reader a buck or two. Reading order: 1. WOOL (5 parts) 2. SHIFT (3 parts) 3. DUST (1 part)