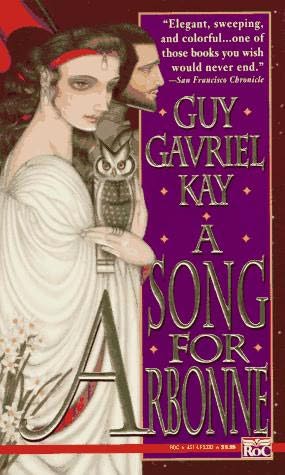 A Song for Arbonne

A Song for Arbonne
Arbonne is a lush, fertile land near the sea, and its people revere music and the Goddess Rian. In Gorhaut, the God Corannos and war are the only considerations. These two countries are on a collision course, which ends in a war where brother fight father — and a life-long friendship ends in death. 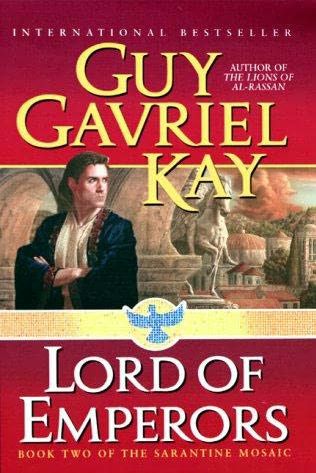 Lord of Emperors
One of the world's foremost masters of fantasy, Guy Gavriel Kay has thrilled readers around the globe with his talent for skillfully interweaving history and Myth, colorful characterization, and a rich sense of time and place. Now, in Lord of Emperors, the internationally acclaimed author of The Lions of Al-Rassan continues his most powerful work. In Sailing to Sarantium, the first volume in the Sarantine Mosaic, renowned mosaicist Crispin — beckoned by an imperial summons of the Emperor Valerius — made his way to the fabled city of Sarantium. A man who lives only for his craft, who cares little for ambition, less for money, and nothing for intrigue, Crispin now wants only to confront the challenges of his art high upon a dome that will become the emperor's magnificent sanctuary and legacy. But Crispin's desire for solitude will not be fulfilled. Beneath him the city swirls with rumors of war and conspiracy, while otherworldly fires mysteriously flicker and disappear in the streets at night. Valerius is looking west to Crispin's homeland of Varena to assert his power — a plan that may have dire consequences for the family and friends Crispin left behind. But loyalty to his homeland comes at a high price, for Crispin's fate has become entwined with that of Valerius and his empress, as well as the youthful Queen Gisel, his own monarch who is an exile in Sarantium herself. And now another voyager arrives in Sarantium, a physician determined to earn his fortune amid the shifting currents of loyalty, intrigue, and violence. Drawing from the twin springs of history and legend, Lord of Emperors is also a deeply moving exploration of art, power, and the ways in which people from all walks of life seek to leave an impression that endures long after they are gone. It confirms Kay's place as one of the world's most esteemed masters of fantasy. Guy Gavriel Kay's distinguished literary career began when he helped complete Tolkien's posthumous masterpiece, The Silmarillion. The author of Tigana, A Song for Arbonne, and The Lions of Al-Rassan, he has been both an Aurora Award winner and a World Fantasy Award nominee. An international bestselling author, his works have been translated into fifteen languages. He lives in Toronto, Canada. 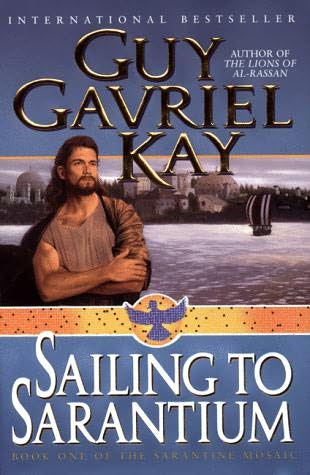 Sailing to Sarantium
Valerius the Trakesian has great ambition. Rumored to be responsible for the ascension of the previous Emperor, his uncle, amid fire and blood, Valerius himself has now risen to the Golden Throne of the vast empire ruled by the fabled city, Sarantium. Valerius has a vision to match his ambition: a glittering dome that will proclaim his magnificence down through the ages. And so, in a ruined western city on the far distant edge of civilization, a not-so-humble artisan receives a call that will change his life forever. Crispin is a mosaicist, a layer of bright tiles. Still grieving for the family he lost to the plague, he lives only for his arcane craft, and cares little for ambition, less for money, and for intrigue not at all. But an imperial summons to the most magnificent city in the world is a difficult call to resist. In this world still half-wild and tangled with magic, no journey is simple; and a journey to Sarantium means a walk destiny. Bearing with him a and a Queen's seductive promise, Crispin sets out for the fabled city from which none return unaltered, guarded only by his own wits and a bird soul talisman from an alchemist's treasury. In the Aldwood he encounters a great beast from the mythic past, and in robbing the zubir of its prize he wins a woman's devotion and a man's loyalty-and loses a gift he didn't know he had until it was gone. In Sarantium itself, where rival Factions vie in the streets and palaces and chariot racing is as sacred as prayer, Crispin will begin his life anew. In an empire ruled by intrigue and violence, he must find his own source of power. And he does: high on the scaffolding of the greatest art work ever imagined, while struggling to deal with the dangers-and the seductive lures-of the men and women around him. Guy Gavriel Kay's magnificent historical fantasies draw from the twin springs of history and legend to create seamless worlds as vibrant as any in literature. Sailing to Sarantium begins THE SARANTINE MOSAIC, a new and signal triumph by today's most esteemed master of high fantasy. 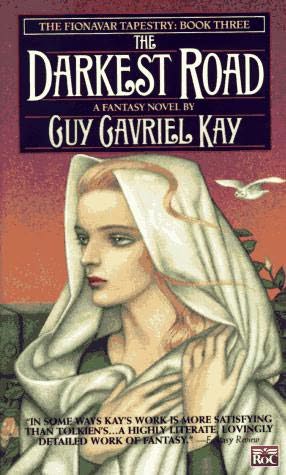 The Darkest Road
Concluding "The Fionavar Tapestry", this book carries the heroes from our world to the final battle for Fionavar against the evil of Rakoth Maugrim. On a ghost-ship the legendary warrior, Arthur Pendragon, and Pwyll Twiceborn, Lord of the Summer Tree, sail to confront the Unraveller. 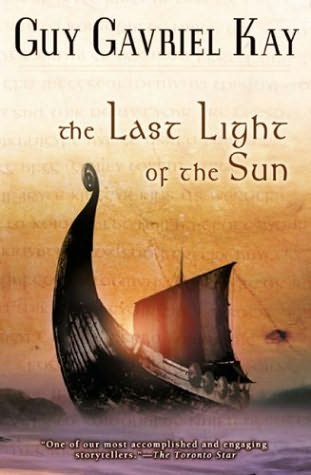 The Last Light of the Sun

The Last Light of the Sun
From award-winning author Guy Gavriel Kay, who "stands among the world's finest fantasy authors" (Montreal Gazette), comes a sweeping tale evocative of the Celtic and Norse cultures of the ninth and tenth centuries, filled with the human passion and epic adventure he is noted for.

The Lions of Al-Rassan
For the inspiration for this novel, Guy Gavriel Kay has drawn on the conflicts in medieval Spain, including King Ferdinand's expulsion of the Jews and forced conversion of those who remained during the Inquisiton, and the fall of Granada to the Christians. In this tale, there are two moons looking over a planet which is home to the country of Esperana. The rulers are the Asharites, who worship the stars and who hail from the neighboring land of Al-Rassan. The Kindath, a dispersed people with no country of their own, worship the moons. The Horsemen of Jad are worshippers of the sun. Zealots from the Asharites and Jaddites are bent on taking advantage of the political turmoil in Esperana, and the central characters of the book do their best to keep civilization going. 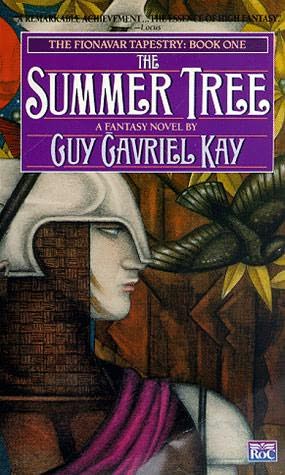 The Summer Tree
Five young people find themselves flung into the magic land of Fionavar, First of All Worlds, to play their part in the vast battle against the forces of evil led by the fallen god Rakoth Maugrim and his dark hordes. This is the first book in a fantasy trilogy in the "Lords of the Ring" tradition. 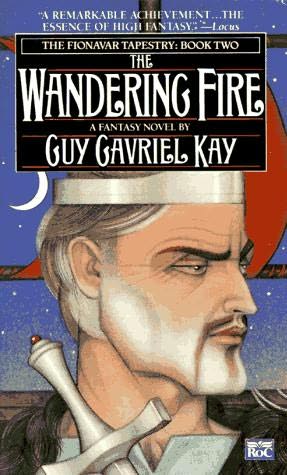 The Wandering Fire
This is the second book in the Fionavar trilogy. It finds the evil Rakoth threatening the existence of Fionavar. To stop him, Kimberly Ford and her companions from Earth must summon the Warrior. But desperate measures can have desperate consequences when curses and prophecies are involved. 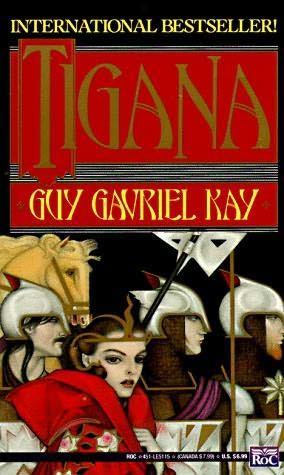 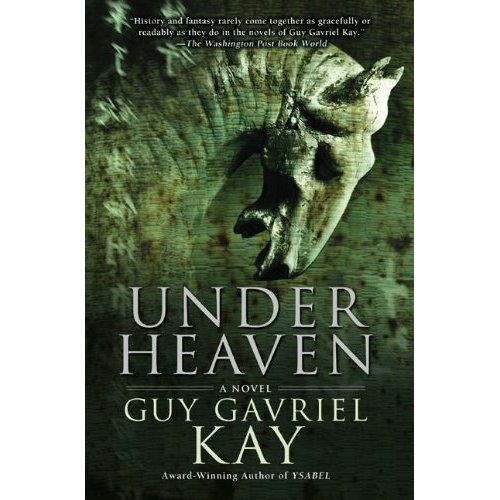 Under Heaven
Shen Tai, the second son of a renowned general of Kitai, is given a lavish gift of 250 prized Sardian horses from the Kitan Empress of the neighbouring Taguran Empire to honour his work burying the dead of both sides at a battleground in the far west of Kitai still haunted by the ghosts of the slain soldiers. This extraordinary gift threatens to engulf Shen Tai in the political and dynastic struggles that surround the throne of the Kitan Emperor, but also permits Shen Tai to form friendships and gain access to the most powerful figures in Kitai. Narrowly escaping an assassination attempt with the assistance of the ghosts of the unburied, Shen Tai leaves the battleground on the western frontier to journey toward the capital, Xinan, protected by Wei Song, a female Kanlin warrior. Another line of narrative follows Shen Tai's sister Li-Mei who is sent north to be married off to a leader of the northern Bogü for the purposes of advancing the career interests of Shen Liu, their older brother. Shen Tai must determine a way forward for himself, which involves making choices between personal, family and imperial needs, choices which become all the more perilous when Kitai is convulsed by a military rebellion that threatens the ruling dynasty. The story weaves themes of loss, chance, honour and friendship in a world still haunted by magic. 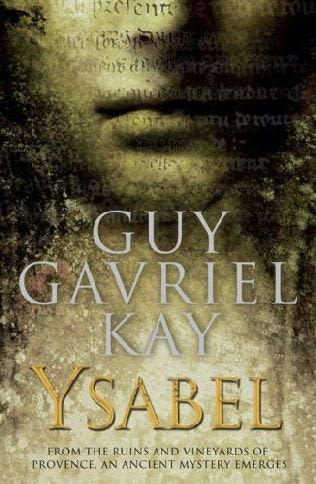 Ysabel
In this exhilarating, moving new work, Guy Gavriel Kay casts brilliant light on the ways in which history—whether of a culture or a family—refuses to be buried. Ned Marriner, fifteen years old, has accompanied his photographer father to Provence for a six-week «shoot» of images for a glossy coffee-table book. Gradually, Ned discovers a very old story playing itself out in this modern world of iPods, cellphones, and seven-seater vans whipping along roads walked by Celtic tribes and Roman legions. On one holy, haunted night of the ancient year, when the borders between the living and the dead are down and fires are lit upon the hills, Ned, his family, and his friends are shockingly drawn into this tale, as dangerous, mythic figures from conflicts of long ago erupt into the present, claiming and changing lives.