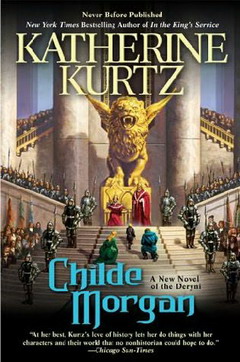 Childe Morgan
In bestseller Kurtz's morbid second tale of her new Deryni trilogy — following 2003's In the King's Service and set before the King Kelson novels — King Donal Haldane is mourning the loss of his bastard son, Krispin, a boy he thought would be companion and protector to Crown Prince Brion, and hoping that Alyce and Kenneth de Morgan's toddler son, Alaric, heir to Alyce's Deryni magic, can be groomed to take Krispin's place. Bishop Oliver de Nore's brother, Septimus, was put to death by the king after Alyce used her powers to reveal that he orchestrated Krispin's killing; now Oliver is doubly motivated to accelerate the church's campaign to exterminate the Deryni, who are feared by many humans in the land of Gwynedd. Kurtz renders even the most plot-twisting demises more dreary than dramatic, which makes for terrific medieval realism but uninteresting narrative. 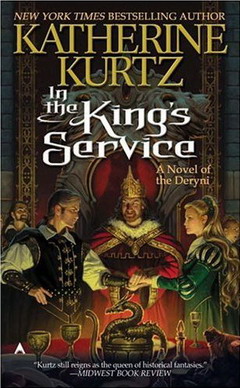 In the King's Service

In the King's Service
"Kurtz is one of the best of those fantasy writers who use medieval-like settings for their novels, and this is one of her better books". — Chronicle. "Kurtz's fidelity to the customs and mores of medieval Europe gives a richness of detail to her alternate medieval world". — Library Journal. "Exquisitely detailed… the scenes of daily life at court, plus the usual church versus magic conflict, will keep fans turning the pages". — Publishers Weekly. "The novel sparkles with Kurtz's attention to detail… can be enjoyed by fans and newcomers alike". — RT Bookclub (Top Pick).