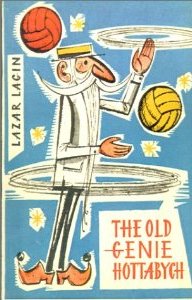 The Old Genie Hottabych
This amusing and fascinating children’s book is often called the Russian “Thousand and One Nights.” Who is the old Genie Hottabych? This is what the author has to say of him: “In one of Scheherazade’s tales I read of the Fisherman who found a copper vessel in his net. In the vessel was a mighty Genie — a magician who had been imprisoned in the bottle for nearly two thousand years. The Genie had sworn to make the one who freed him rich, powerful and happy. “But what if such a Genie suddenly came to life in the Soviet Union, in Moscow? I tried to imagine what would have happened if a very ordinary Russian boy had freed him from the vessel. “And imagine, I suddenly discovered that a schoolboy named Volka Kostylkov, the very same Volka who used to live on Three Ponds Street, you know, the best diver at summer camp last year… On second thought, I believe we had better begin from the beginning…”