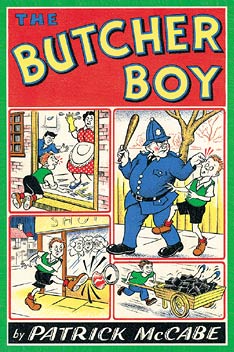 The Butcher Boy
SHORTLISTED FOR THE 1992 BOOKER PRIZE WINNER OF THE IRISH TIMES-AER LINGUS LITERATURE PRIZE FOR FICTION "BRILLIANT, UNIQUE. Patrick McCabe pushes your head through the book and you come out the other end gasping, admiring, and knowing that reading fiction will never be the same again. It's the best Irish novel I've read in years." – Roddy Doyle, Author, Paddy Clarke Ha Ha Ha "STUNNING… PART HUCK FINN, PART HOLDEN CAULFIELD, PART HANNIBAL LECTER." – The New York Times Book Review "AN ALMOST PERFECT NOVEL… A BECKETT MONOLOGUE WITH PLOT BY ALFRED HITCHCOCK… STARTLINGLY ORIGINAL." – The Washington Post Book World "BRILLIANT… Francie is a shrewd and amusing observer… his voice is mordant, colloquial and brash as a punch in the nose." – Scott Turow "A ROLLICKING NASTY NOVEL." – The Village Voice "There are a number of fine novels about violent youth, and Patrick McCabe's frightening and sorrowful The Butcher Boy stands up to any of them… Francie portrays himself in every word he utters, and his language gives Patrick McCabe's The Butcher Boy its valuable dread power." – The Atlanta Journal Constitution "A CHILLING TALE OF A CHILD'S HELL… OFTEN SCREAMINGLY FUNNY… THE BOOK HAS A COMPELLING AND TERRIBLE BEAUTY." – The Boston Globe "A tour de force." – Kirkus Reviews "IT'S AS BRIGHT AS IT IS DEPRESSING, AS FUNNY AS IT IS GRUESOME. We see Francie clearly as psychopath, and we ache with sympathy for him. It's almost impossible to pinpoint the moment in his growing up when the imagination of an ordinary boy shades over into something dangerously loony. The key is Francie's slangy, angry, '60s-flavored voice, which McCabe renders with a minimum of punctuation and a maximum of control." – Los Angeles Times Book Review "AN UNRELENTING, UPBEAT STREAM OF PATTER. McCabe's acclaimed third novel… walks the path of dementia with remarkable assurance." – Entertainment Weekly "McCABE'S FRANCIE SPEAKS IN A RICH VERNACULAR SPIRITED BY THE BRASSY AND ENDEARING RHYTHMS OF PERPETUAL DELINQUENCY; even in his gradual unhinging, Francie remains a winning raconteur. By looking so deeply into Francie's soul, McCabe subtly suggests a common source of political and personal violence – lack of love and hope." – Publishers Weekly "PATRICK McCABE IS AN OUTSTANDING WRITER. The Butcher Boy is fearful, original, compelling and very hard to put out of your mind. American readers should pay close attention to this man." – Thomas McGuane "A BRILLIANT BOOK SO VERY FUNNY AS WELL AS BEING HEARTRENDINGLY SAD." – J. P. Donleavy "Written with wonderful assurance and a technical skill that is as great as it is unobtrusive… Perhaps the novel is best read as a twisted coming-of-age story; imagine Huck Finn crossed with Charlie Starkweather, and you have Francie Brady, the young narrator of The Butcher Boy." – The Washington Post Book World "A POTENT AMALGAM OF COMEDY, HORROR AND PATHOS… The Butcher Boy is a prime slice of modern Gothic… McCabe presents a study in spiritual derangement that rivets." – The Sunday Times (London) "DEADLY SERIOUS, TERRIFICALLY LOONY AND SCARY, AND ABSOLUTELY HILARIOUS… Francie Brady's story is reminiscent of Samuel Beckett's Molloy, Moran, Malone, and the Unnameable even, with Anthony Burgess's Alex tossed in for good measure." – James McManus "THE MOST ASTONISHING IRISH NOVEL FOR MANY YEARS, A MASTERPIECE." – Sunday Independent "A POWERFUL AND DEEPLY SHOCKING NOVEL where the seemingly innocent logic of a child imperceptibly turns into the manic logic of an unhinged mind. Patrick McCabe portrays 1960s small-town life from a bizarre perspective where the aliens from Outer Space on the television are as real as the emotional poverty of one child filled with unconscious envy for another." – Dermont Bolger