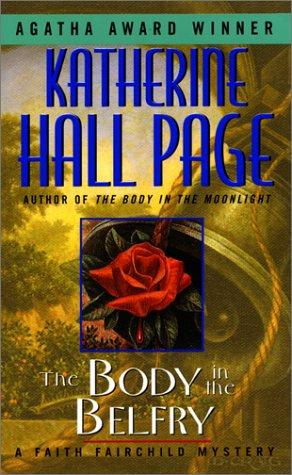 Body In The Belfry

Body In The Belfry
During her years spent in New York City. Faith Fairchild was convinced she had seen pretty much everything. But the transplanted caterer/minister's wife was unprepared for the surprises awaiting her in the sleepy Massachusetts village of Aleford. And she is especially taken aback by the dead body of a pretty young thing she discovers stashed in the church's belfry. The victim, Cindy Shepherd. was well-known locally for her acid tongue and her jilted beaux, which created a lot of bad blood and more than a few possible perpetrators -- including her luckless fiance, who had neither an alibi nor a better way to break off the engagement. Faith thinks it's terribly unfair that the police have zeroed in on the hapless boyfriend, and so she sets out to uncover the truth. But digging too deeply into the sordid secrets of a small New England village tends to make the natives nervous. And an overly curious big city lady can become just another small town death statistic in very short order. From Publishers Weekly Page's first novel lacks professional polish and a likable heroine, flaws not compensated for by vivid evocations of a New England autumn in Aleford, Mass. This is home to Faith Fairchild, a native New Yorker, now the wife of the town minister, Tom, and mother of their baby Benjamin. Although she loves her husband and child, Faith belittles the stodgy townspeople, except for a few friends. Eager to help good neighbors Patricia and Robert Moore, the minister's wife throws herself into investigating the murder of their niece, Cindy Shepherd, whose body Faith discovers in the church belfry. Cindy had been an embarrassment to the Moores, her guardians after the death of her parents; a promiscuous young woman, she had upset virtually everyone, even her pathetic fiance, Dave Svenson. When the police arrest Dave, the logical suspect, Faith goes on sleuthing while Tom tries to help the youth and his family. The self-appointed detective pries into the affairs of numerous suspects, risking her life as well as the lives of Benjamin and another child. Perhaps Faith's continued adventures will find her less snobbish and almost as cute as she thinks she is. 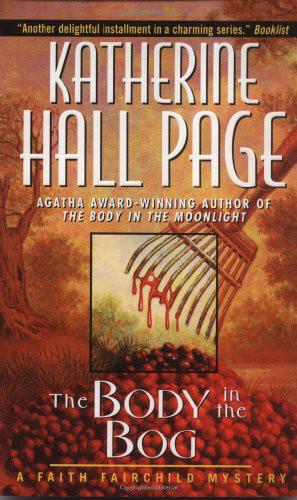 Body in the Bog

Body in the Bog
Faith Fairchild is momentarily shocked to find her husband, the Reverend Thomas Fairchild, embracing Lora Deane -- and relieved to discover the distraught nursery school teacher is merely seeking solace and advice. Lora has been receiving threatening phone calls. And she's not the only resident of tiny Aleford, Massachusetts, who is being terrorized. Ever since local environmentalists have begun protesting the proposed housing development that will destroy Beecher's Bog, the more vocal opponents have become targets of a vicious campaign of intimidation-which is more than enough reason for Faith to launch into some clandestine sleuthing. But when a body turns up in the charred ruins of a very suspicious house fire, Faith is suddenly investigating a murder -- and in serious danger of getting bogged down in a very lethal mess indeed! From Publishers Weekly The cozy village of Alesford, Mass., may seem an unlikely spot for murder, but such crimes gravitate toward Faith Fairchild, the local minister's wife and self-employed caterer. In her seventh case (after The Body in the Kelp), the sleuthing mother of two and her husband, Tom, find themselves in the middle of a town controversy over the proposed development of Beecher's Bog, a popular nature spot. The disagreement turns nasty when opponents of the planned luxury housing begin receiving poison pen letters. An arson fire and a corpse later, the town's residents are enraged and fearful as they plan the annual Patriots' Day celebrations. Faith keeps an eagle eye out for the murderer, whom she eventually encounters in her own company kitchen. While Page's pacing lacks crispness, some unusual characters-a preschool teacher who has an apparent double life and the feisty town historian who heads up POW! (Preserve Our Wetlands!)-and Faith's good nature generally compensate in this New England mystery, which is accompanied by five recipes, including one for Faith's Yankee Pot Roast. 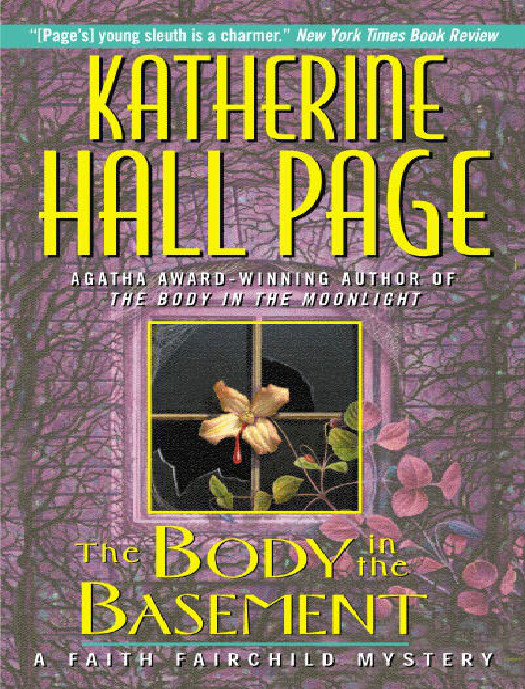 The Body In The Basement

The Body In The Basement
A Good Foundation ... For Murder Pix Miller, Faith Fairchild's next-door neighbor, expects to find more than a hole in the ground when she goes to check on the progress of the summer cottage the Fairchilds are having built on Maine's Sanpere Island. She expects a concrete foundation. What she doesn't expect is a very dead body wrapped in a very valuable antique quilt! The deceased is a local handyman with a suspiciously lucrative sideline in antiques. Sharing her friend Faith's inquisitive nature, Pix resolves to restore Sanpere's shattered peace. But by digging too deeply the determined Ms. Miller just might be arranging another burial -- her own! From Publishers Weekly Featuring recipes, quilting lore and murder, Page's sixth entry in the Faith Fairchild series (after The Body in the Cast) centers around the Massachusetts housewife and caterer's next-door neighbor, occasional employee and friend, Pix Miller. Early in the summer on Sanpere Island, Maine, Pix and her daughter check the construction work on the Fairchilds' summer cottage and discover a quilt-wrapped body buried where the foundation will soon be poured. Dead is Mitchell Pierce, an antiques seller and house restorer with a host of enemies on the island. While her daughter begins work at the island summer camp, Pix wonders about the blue X stitched on the edge of the quilt in which the body was wrapped. As a series of pranks at the summer camp turns nasty (decapitated mice are left on a kitchen counter and red paint is splattered on boat sails), Pix begins asking questions and, although she often calls Faith with progress reports, ends up solving that murder and one that follows. This leisurely tale, with recipes for fish chowder, corn bread and blueberry tart, nicely frames the down-to-earth, eminently likable Pix, who proves an enjoyable stand-in for Faith. 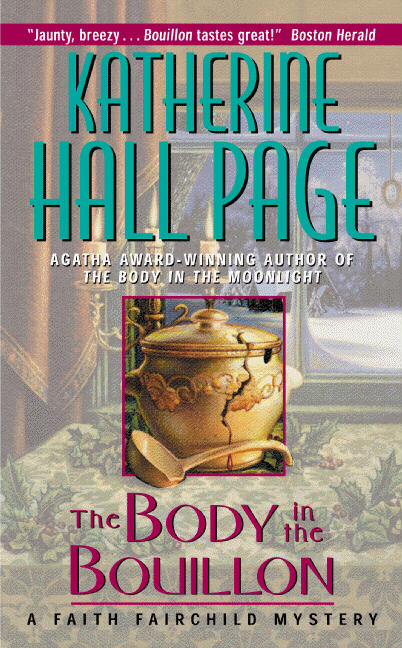 The Body in the Bouillon

The Body in the Bouillon
"Only the best people go to Hubbard House to die". So Faith Sibley Fairchild, gourmet caterer-turned-amateur sleuth, is told as she begins to investigate some mysterious doings at a retirement community near the village of Aleford, Massachusetts, where her husband is the local minister. And die they do--in Faith's bouillon, even in her bed. 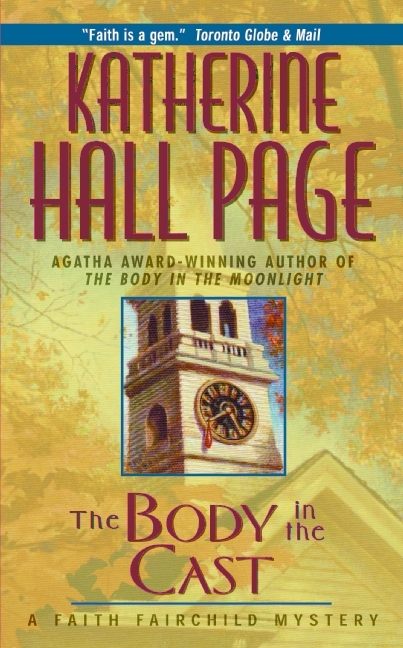 The Body in the Cast

The Body in the Cast
What a bounty Katherine Hall Page gives her readers here. The Body in the Cast is as full of treasures as a Christmas stocking. First, of course, there's Page's lovely sleuth, the transplanted New York caterer Faith Fairchild, a minister's wife, gourmet cook, mother, and all-around charmer. There's the excitement that grips her little town of Aleford, Massachusetts, when a movie company arrives to shoot an arty, updated version of The Scarlet Letter. There are recipes straight from Faith's Kitchen. There's a local election as hotly disputed as only a small-town contest can be. And there is murder. After relaunching her catering company, Have Faith, Faith tackles the feeding of the cast and crew. There's quite a fright when the company falls ill from food poisoning. Faith can't believe that it was her cooking that did it, but the only other explanation is that someone deliberately poisoned the food. And when there's another poisoning in the company, this one fatal, Faith has to break her promise to her husband Tom and do some detective work herself. From Publishers Weekly Faith Fairchild, caterer and minister's wife in Aleford, Mass., rebounds from her last case, The Body in the Vestibule , as a crew filming a remake of The Scarlet Letter arrives in town while a fierce local election is at stake. Happily, Faith lands the job as caterer for the production company of A , which includes Maxwell Reed, the director known as the "New Jersey Fellini," some stars of considerable magnitude, and even, as a lowly production assistant, Faith's old schoolmate, Cornelia Stuyvesant. But problems seem to plague the production. First, a fire breaks out in a nearby barn; then the company's soup is laced with a laxative. Everyone, including the police, considers these events just pranks, but after a stand-in is poisoned on the set, Faith suspects sabotage and initiates some subtle snooping. When a candidate for Aleford's Board of Selectmen is bludgeoned to death and his opposition (and half-sister) disappears, Faith decides more than movie madness is occuring and begins to investigate in earnest. Pen and ink illustrations and five recipes add little to this lively tale that stands perfectly well on the merits of Page's spirited characterization and energetic plotting. 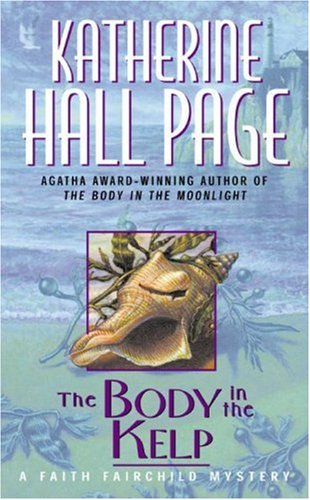 The Body in the Kelp

The Body in the Kelp
It seems as if nothing is going to liven up Faith Fairchild's deathly dull vacation on Maine's Sanpere Island -- until she buys a beautiful handmade quilt at an estate auction. Lovingly constructed by wealthy, deceased, and detested Matilda Prescott, Faith's purchase turns out to be quite a bargain indeed -- especially when she discovers it to be a map to the old woman's hidden treasure. But instead of pointing the transplanted New York caterer-turned-minister's wife toward the fabled Prescott gold, Matilda's artfully crafted clues lead Faith to a kelp-covered corpse floating in a nearby tidal pool. Once again, the resourceful amateur sleuth has become entangled in a dangerous puzzle, ensnared in twisted, lethal threads of familial greed and cold-blooded homicide. And Faith won't be satisfied until she has the whole murderous matter sewn up. 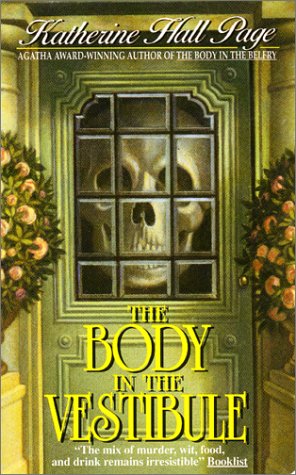 The Body in the Vestibule

The Body in the Vestibule
Another thrilling Faith Fairchild adventure from the Agatha Award-winning author of The Body in the Belfry. The Fairchild family is blissfully on sabbatical in Lyon, France, when their peace is interrupted by Faith's discovery of a body in the dumpster. Local author signings.