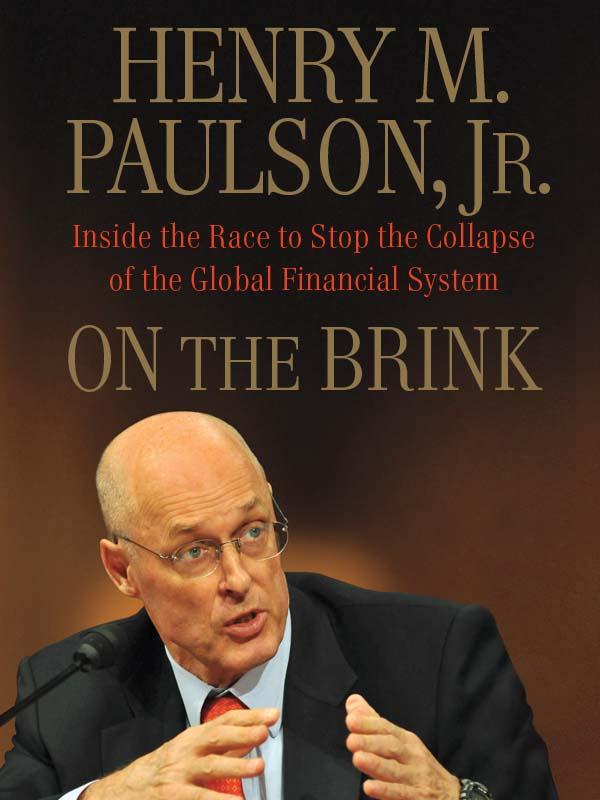 On the Brink: Inside the Race to Stop the Collapse of the Global Financial System

On the Brink: Inside the Race to Stop the Collapse of the Global Financial System
Amazon.com Review When Hank Paulson, the former CEO of Goldman Sachs, was appointed in 2006 to become the nation's next Secretary of the Treasury, he knew that his move from Wall Street to Washington would be daunting and challenging. But Paulson had no idea that a year later, he would find himself at the very epicenter of the world's most cataclysmic financial crisis since the Great Depression. Major institutions including Bear Stearns, Fannie Mae, Freddie Mac, Lehman Brothers, AIG, Merrill Lynch, and Citigroup, among others-all steeped in rich, longstanding tradition-literally teetered at the edge of collapse. Panic ensnared international markets. Worst of all, the credit crisis spread to all parts of the U.S. economy and grew more ominous with each passing day, destroying jobs across America and undermining the financial security millions of families had spent their lifetimes building. This was truly a once-in-a-lifetime economic nightmare. Events no one had thought possible were happening in quick succession, and people all over the globe were terrified that the continuing downward spiral would bring unprecedented chaos. All eyes turned to the United States Treasury Secretary to avert the disaster. This, then, is Hank Paulson's first-person account. From the man who was in the very middle of this perfect economic storm, On the Brink is Paulson's fast-paced retelling of the key decisions that had to be made with lightning speed. Paulson puts the reader in the room for all the intense moments as he addressed urgent market conditions, weighed critical decisions, and debated policy and economic considerations with of all the notable players-including the CEOs of top Wall Street firms as well as Ben Bernanke, Timothy Geithner, Sheila Bair, Nancy Pelosi, Barney Frank, presidential candidates Barack Obama and John McCain, and then-President George W. Bush. More than an account about numbers and credit risks gone bad, On the Brink is an extraordinary story about people and politics-all brought together during the world's impending financial Armageddon.