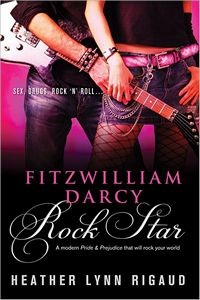 Fitzwilliam Darcy, Rock Star
Fast music, powerful beats and wild reputations on stage and off have made Slurry the band of the year--and the media's newest bad boys. Described as temperamental by their kindest critics, they've just lost their latest opening act and their red-hot summer tour is on the fast track to disaster. Fitzwilliam Darcy, Slurry's tall, dark, and enigmatic virtuoso guitarist, knows that this is no time to be picky, but he never expected what was waiting when he, Charles Bingley and Richard Fitzwilliam crashed the Meryton Public House.  Elizabeth Bennet, the fiercely independent and talented lead singer of Long Borne Suffering has serious reservations about joining such a trouble laden tour with the bad boys of Rock and Roll, but the opportunity is just too good to pass up! On the Slurry tour, the music's hot, but backstage is an inferno.