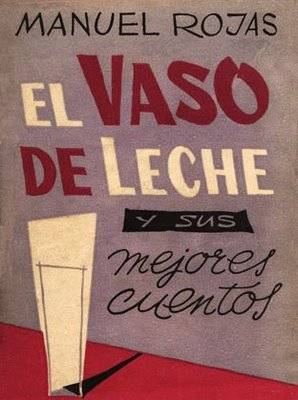 El vaso de leche
In 1927, Manuel Rojas published his first significant collection of short stories, Hombres del sur (Men of the South), which included his short story "El vaso de leche." It is one of Rojas' best known and most widely anthologized tales. "El vaso de leche" ("The Glass of Milk") is an intensely written short story that examines a brief moment in the life of a youth who is out of work and very hungry. The unnamed youth is refused work and refuses free food. He finally is overcome with a hunger stronger than his pride. He accepts some milk and cookies from the woman in the milk bar and experiences a powerful emotional release. She understands, and he leaves the cafe without paying. Grafton Conliffe identifies Rojas as one of the premiere Chilean writers. He was innovative in character development, portraying hard-working, down-and-out people in a sensitive, sympathetic fashion. Cedomil Goic reports that Rojas was the first Chilean writer to use the subjective narrator, a narrator who makes comments on and takes part in the telling of the story. However, the narrator in "The Glass of Milk" is an objective narrator. Rojas acknowledged being influenced by the American writers Ernest Hemingway and William Faulkner. In his fiction, Rojas often included autobiographical material derived from his youth, when he and his family wandered about in the mountains of southern Chile and Argentina. However, this story is not about himself. It is a tale about the plight of the lower classes in his adopted homeland, as witnessed through the life of one young lad. Rojas does not preach; he lets his readers come to their own conclusions about the problems these people face. The Glass of Milk Summary In "The Glass of Milk," a youth who has been expelled from a ship as a stowaway finds himself walking around the port looking for work to earn money to buy some food. He has not eaten in three days, yet he refuses a handout from a sailor and then watches hungrily as a "gaudy tramp" accepts the food and eats it. He finds some work unloading a vessel. After the first day he asks for his…»