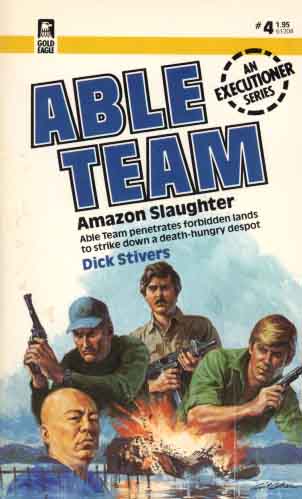 Amazon Slaughter
Wei Ho was death incarnate. He could slake his thirst for blood whenever and wherever he wanted. He had chosen the hunters of his private army very carefully — they were some of the most vicious hoodlums in the world. Now he had his own plutonium factory. And it was protected by a web of organized intrigue. Only one squad could take out Wei Ho and prevent global tragedy: Mack Bolan s Able Team! To neutralize Ho s goulish scheme, Lyons, Schwarz, and Blancanales probed to the core of the maniac s domain in South America — but all they found there were blameless native slaves. Would there be a massacre of innocents before the despots could be delivered to hell? 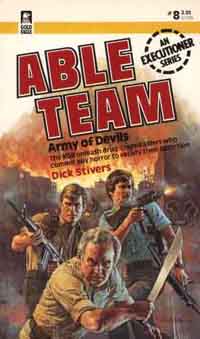 Army Of Devils
As incidents of frenzied murder and mutilation terrorize Los Angeles, police chemists discover a new drug sweeping through the gang subculture. "Crazy dust" — a variant of PCP one hundred times more addicting than heroin — creates inhuman monsters willing to go to any extremes to finance their addiction. Drugged gangs wander neighborhoods. Crazed punks besiege police stations, ambush narco strike squads with automatic weapons. Only Able Team has the guts — and the firepower — to combat a Soviet plot to destroy democracy with a proxy army of drug-mad devils. 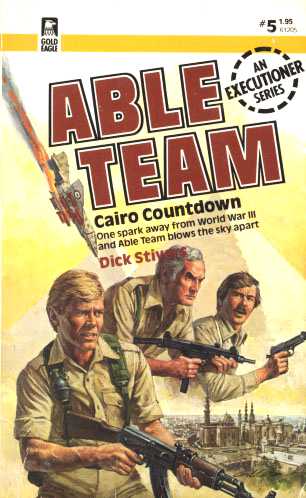 Cairo Countdown
The U.S. maintained a top-secret air-force base in Cairo. And it operated right out of the international airport! Suddenly a terrorist rampage threatened to reveal the covert American presence in egypt. No known intelligence agency could risk exposure to break this attack on one of America s biggest secrets. Therefore, in the name of Mack Bolan, come in Able! But the terrorists had crack killer-teams of their own— and they would not hesitate to use them... 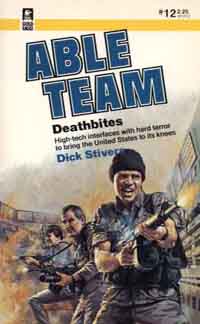 Deathbites
Terrorist death squads wipe out three leading U.S. computer research facilities and push America to the precipice of computer chaos. The program was always the same — murderous precision, total extermination, no human mercy. A sole survivor of one of the silicon-chip massacres guides Able Team to the hidden data bank that directs the terrorists in their program for panic. While the beautiful and brainy Lao Ti taps into the death data, Carl Lyons, Gadgets, and Politician pursue an army of psychotic misfits. The computer world trembles under the onslaught of the terrorist strike force as Able Team, joined by Phoenix Force and Hal Brognola, launches a fierce counterattack to shatter the circuits of savagery. 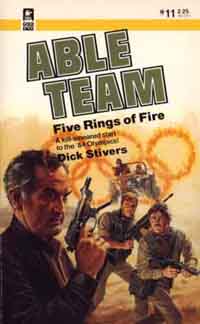 Five Rings Of Fire
A tragedy perpetrated by heartless savages bloodies the training gym of America's leading female athletes. The horror continues as a busload of Zambian athletes is kidnapped in a blood-splashed encounter at Los Angeles airport. Able Team checks out dead goons at the scene and recognizes them as professionals. They smell KGB. The President grants Carl Lyons — Able Team's "Mr. Ironman" — emergency command of the armed forces. The erupting war pits Lyons and his partners against unparalleled savagery — and zaps him right up against his old employer, the LAPD. Able Team deserves the gold for their killing skills against impossible odds! 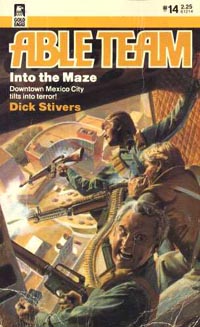 Into The Maze
A new heroin syndicate, using military weapons and a faction of the Mexican army, has eliminated all the other gangs in Mexico. Their operation now stands invincible. Able Team cuts its way into the action, careering into open war against the drug ring. But everyone, even the U.S. Drug Enforcement Agency, is plotting war against Able Team! In and above the streets of Mexico City, the world's most crowded metropolis, the men of Able Team fight for survival from attack on all sides. Over the roar of battle, Blancanales yells at a Mexican army lieutenant, "We have been tricked by your government and by ours! Betrayal is everywhere! How do you expect us to take this insanity?" 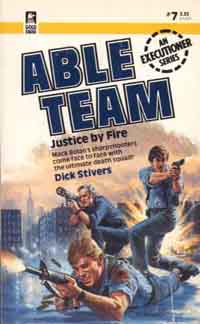 Justice By Fire
From New York to Los Angeles, kill squads were murdering career criminals and psychopathic killers. The public welcomed these "executions" of rapists and murderers whom the courts had failed to imprison. Silencing critics with death, the death squads blew away outspoken media stars, Black nationalists, Communist agitators... all int he guise of law and order. But the truth was that the squads were working for the enemies of America. Democracy had ruptured, spilling out chaos. The president responded with his own squad of death-dealing hotshots — Mack Bolan's Able Team! 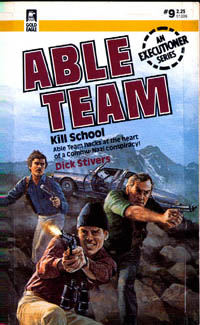 Kill School
Dispatched to return fascist commander Col. Roberto Quesada to face the televised spectacle of trial in the United States, Able Team drops into the free-fire zone of El Salvador's Morazan province. A Salvadoran army commando, obsessed with revenge for his "disappeared" father and brother, guides Able Team across a landscape of terror and atrocity. Then a coded radio transmission from Washington, D.C. betrays Able Team. Battling against Stalinist assassins, the three North Americans pursue Quesada into the lost world of the Honduran mountains — where Pan-American Nazis are training the shock troopers of a New World Reich. 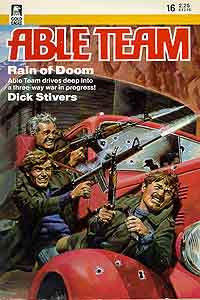 Rain Of Doom
In Beirut, an American voice speaks into the telephone: "We'll never forget the Beruit bomb. Tell the mullahs they can run, they can hide, but the posse of the Apocalypse rides in the night. The payback will not quit until we have killed Khomeini..." 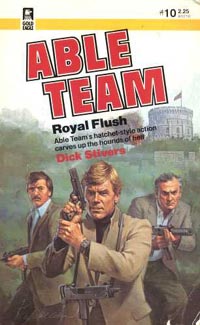 Royal Flush
Able Team's mission: a cocaine bust in Manhattan. But a crooked trail soon takes the three aces of death to Windsor Castle in England. Able Team discovers that the fanatical Irish National Army of Liberation will attack the Royal Family in two days... U.S. agent Leo Turrin, already in London to find an infiltrator in the British counterterror network, gets some wild help as the American hotshots make meat stew out of ruthless attackers. No quarter is spared. Justice by fire, worldwide! 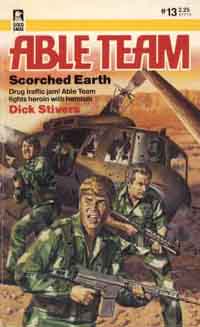 Scorched Earth
Guided by a captured gang pistolero, Able Team crashes into the firestorm of the Mexican heroin wars. The three superspecialists blaze a desperate path across a desolate landscape to confront drug armies waging a campaign of atrocity and extermination. Betrayed by the American Drug Enforcement Agency, facing the combined forces of the heroin gangs and Mexican traitors, Able Team enlists the Yaqui warriors of the Sierra Madres in their war against the Empire of Heroin. United, they strike. War leads to more war, as hot pursuit of the gang lords throws Able Team against a conspiracy that is using billions of dope dollars to finance the Fascist conquest of the Americas! 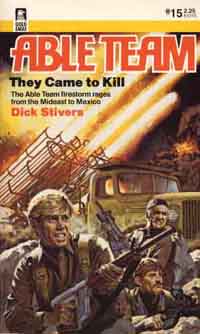 They Came To Kill

They Came To Kill
After the ambush-murders of a Central Intelligency Agency surveillance unit, Able Team flies to Lebanon with instructions to "arrest or terminate" a renegade U.S. Marine fighting for the Islamic militias of Beirut. But in the twisted politics and free-fire streets of the devastated city, Able Team decides to disregard their instructions and join the Marine and his Shia friends to confront a conspiracy of fanatics — Syrians, Iranians, Libyans and American black nationalists — united in their lust for terror. Able Team wages a dirty battle through the ruins of Beirut, then tracks the gangs halfway around the world to Mexico, where the Americans hurl themselves against the zealots before they murder again — this time, the President of the United States! 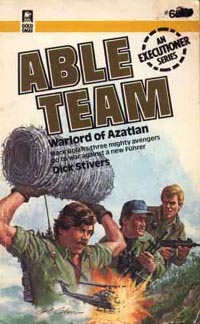 Warlord Of Azatlan
Dispatched by the President to investigate a multimillion-dollar weapons-for-drugs exchange, Able Team probed deep into the wilds of Guatemala. There, The Executioner' s top squad of death dealers fell into a bloody maze of terror. Unexpected allies led the three hotshots to the source of a conspiracy to assassinate the Christian leader of Guatemala and to annihilate that nation's newborn forces of democracy and liberty. Surrounded by genocidal war and devoted courage, Able Team discovered the greatest horror yet in the campaign against international terrorism: a fascist plot to seize all of Central America and then all the nations of the new world... for the resurrection of the Third Reich!