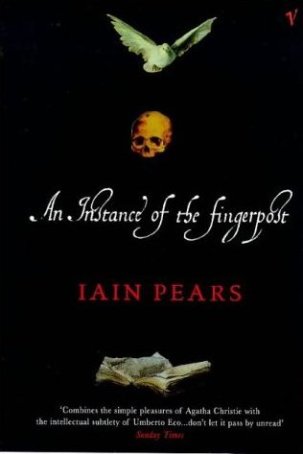 An Instance of the Fingerpost

An Instance of the Fingerpost
We are in Oxford in the 1660s—a time, and place, of great intellectual, scientific, religious and political ferment. Robert Grove, a fellow of New College is found dead in suspicious circumstances. A young woman is accused of his murder. We hear about the events surrounding his death from four witnesses—Marco da Cola, a Venetian Catholic intent on claiming credit for the invention of blood transfusion; Jack Prescott, the son of a supposed traitor to the Royalist cause determined to vindicate his father; John Wallis, chief cryptographer to both Cromwell and Charles II, a mathematician, theologican and inveterate plotter; and Anthony Wood, the famous Oxford antiquary. Each witness tells their version of what happened. Only one reveals the extraordinary truth. An Instance of the Fingerpost is a magnificent tour de force—an utterly compelling historical mystery story with a plot that twists and turns and keeps the reader guessing until the very last page. 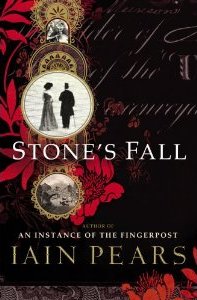 Stone's Fall
A tour de force in the tradition of Iain Pears' international bestseller, An Instance of the Fingerpost, Stone's Fall weaves a story of love and high finance into the fabric of a page-turning thriller. A novel to stand alongside Atonement and The Remains of the Day. A panoramic novel with a riveting mystery at its heart, Stone's Fall is a quest, a love story, and a tale of murder — richly satisfying and completely engaging on many levels. It centres on the career of a very wealthy financier and the mysterious circumstances of his death, cast against the backdrop of WWI and Europe's first great age of espionage, the evolution of high-stakes international finance and the beginning of the twentieth century's arms race. Stone's Fall is a major return to the thriller form that first launched Iain Pears onto bestseller lists around the world and that earned him acclaim as a mesmerizing storyteller. 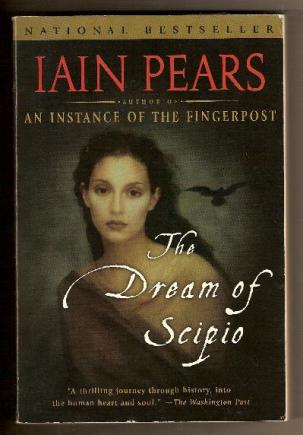 The Dream of Scipio

The Dream of Scipio
Set in Provence during the collapse of the Roman Empire in the 5th century, the Black Death in the 14th century, and World War II, this novel follows the fortunes of three men — a Gallic aristocrat, a poet and an intellectual who joins the Vichy government. 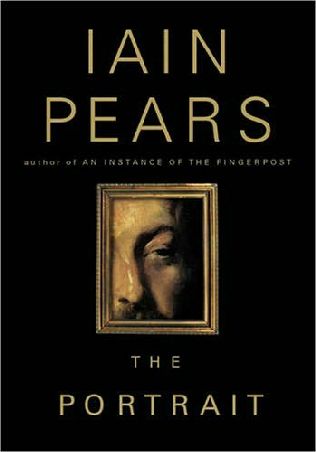 The Portrait
A perfectly rendered short novel of suspense about a painter driven to extremes.  An influential art critic in the early years of the twentieth century journeys from London to the rustic, remote island of Houat, off France's northwest coast, to sit for a portrait painted by an old friend, a gifted but tormented artist living in self-imposed exile. Over the course of the sitting, the painter recalls their years of friendship, the double-edged gift of the critic's patronage, the power he wielded over aspiring artists, and his apparent callousness in anointing the careers of some and devastating the lives of others. The balance of power between the two men shifts dramatically as the critic becomes a passive subject, while the painter struggles to capture the character of the man, as well as his image, on canvas.  Reminiscing with ease and familiarity one minute, with anger and menace the next, the painter eventually reveals why he has accepted the commission of this portrait, why he left London suddenly and mysteriously at the height of his success, and why now, with dark determination, he feels ready to return.  Set against the dramatic, untamed landscape of Brittany during one of the most explosive periods in art history, The Portrait is rich with atmosphere and suggestion, psychological complexity, and marvelous detail. It is a novel you will want to begin again immediately after turning the last chilling page, to read once more with a watchful eye and appreciate the hand of an ingenious storyteller at work.